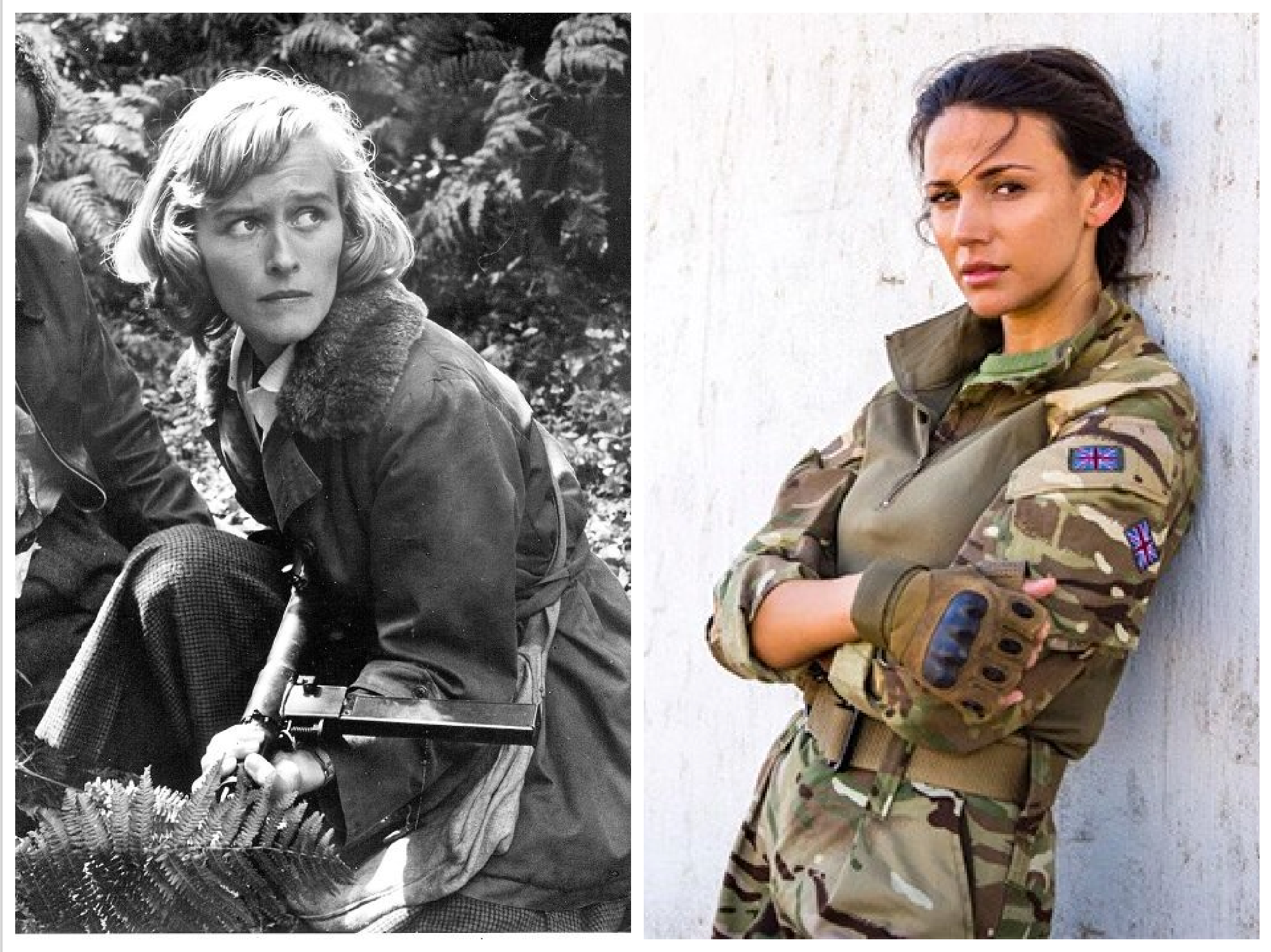 It's become an annual Memorial Day tradition for me to highlight women in war movies, in honor of the soldiers (of all genders) who have given their lives in our conflicts.

Carve Her Name With Pride

After years of seeing it on search lists about women at war, I finally managed to get a copy of the film Carve Her Name With Pride. Pride is based on the true story of WW2 British spy Violette Szabo. Contemporary with the brave ladies in A Time to Spy (which I reviewed last year), Szabo served as an agent for the Special Operations Executive (SOE).

The film starts slow, focusing on Szabo meeting her husband (an officer with the French Foreign Legion who would influence her journey to the SOE) and being recruited into military service. Though the pacing lags at times, these scenes are critical for letting us get to know the woman, not just the spy.  We see Szabo's spirit in moments like a pillow fight with her brother, or climbing a tree on her honeymoon. We see her feminine side–falling in love, and celebrating a birthday party with her toddler daughter. And we see her struggle between her duty to her family and her duty to her country. It's not an easy decision for her, but in the end she decides, "I couldn't live the rest of my life knowing I'd failed to do my bit." All of these moments serve to humanize her, something that Time to Spy was missing.

Once Szabo is off to occupied France, the film kicks into high gear. There are all the usual WW2 resistance tropes–parachuting behind enemy lines, bluffing Gestapo officers, navigating through air raids, and shooting Nazis. Honestly, for a movie made in 1958, it was cool just how much they showed Szabo being the badass that she really was.

SPOILER ALERT! If you aren't already familiar with Szabo's story and don't want to ruin the ending, skip ahead to the ratings.

During her second mission to France, Szabo is captured. Here, the film is pretty true to the bravery that earned her a George Cross, Britain's highest civilian award for gallantry. She held off the Germans as long as she could, letting others escape. As it says in her citation for the award:

Resistance appeared hopeless but Madame Szabo, seizing a Sten-gun and as much ammunition as she could carry, barricaded herself in part of the house and, exchanging shot for shot with the enemy, killed or wounded several of them. By constant movement, she avoided being cornered and fought until she dropped exhausted. She was arrested and had to undergo solitary confinement. She was then continuously and atrociously tortured but never by word or deed gave away any of her acquaintances or told the enemy anything of any value. She was ultimately executed. Madame Szabo gave a magnificent example of courage and steadfastness.

In the movie it's a forest instead of a house, but the gist is the same. In fact, the only significant deviation from history seems to be the addition of a low-key romance with fellow agent Captain Frazer (after her husband's death), which as far as I can tell seems to have been invented out of whole cloth. Actress Virginia McKenna does an excellent job portraying Szabo's courage and determination, a fitting testament to a real hero.  For more information about Szabo, see the British Imperial War Museum.

I first reviewed Our Girl in the 2020 Edition after seeing seasons 1 and 2, and gave it mixed reviews. Having seen seasons 3 and 4, I thought it was worth revisiting.

From season 2 onward, the show focused on combat medic Georgie Lane. I found her to be somewhat of an enigma in season 2, but the show really fleshed her out in subsequent seasons. She became more of a mother hen for  2 Section,  and experienced some professional development as well--becoming a sergeant and a training leader. The series put a lot of effort into developing the other soldiers as well, turning them into more than just bland background soldiers with goofy nicknames. As an added bonus, it added a bunch of new female characters so Georgie wasn't the only girl on screen.

It's the relationships between the characters that really make the show stand out. Georgie's mentoring of loose cannon driver Masie Richards during a humanitarian mission in season 3 felt nicely contrasted with her training shy junior medic Mimi Saunders in season 4. I particularly liked the friendship Georgie formed with a female Afghani doctor and political leader in season 4. Even with the guys, Georgie developed strong ties with Sergeant King, brother-in-law Fingers, and ex-schoolteacher Prof.

The action is solid as well, grounded and at times brutal. The show branching out from Afghanistan was a welcome change, allowing them to explore different sides of soldiering. From disaster relief to fighting drug lords and terrorists, there were a nice variety of stories. It's a bummer that the BBC isn't planning a season 5, but at least the show went out on a high note with a solid resolution.