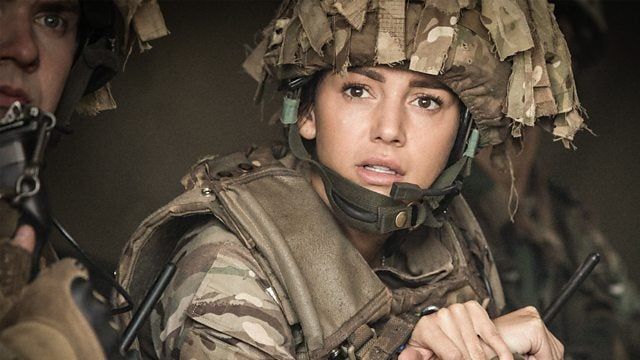 Read other editions of my Women in War Movies series.

In preparation for my annual Memorial Day blog post in honor of our soldiers and their sacrifices, I hunt around for hidden gems--movies featuring women soldiers I might have missed.  I got my hopes up when I saw an article from BBC America: 10 Films Featuring Women in Combat.

Alas, on a closer look, I found that half of the films are sci-fi (including one vampire film??), one's about a CIA analyst who never actually sees combat, and one's about Joan of Arc. The only legit representations of modern-day servicewomen were made decades ago.

On the up side, I also learned that Paramount announced they were making a film about Virginia Hall, famed WWII spy and resistance fighter. There hasn't been a peep about it since 2017, so who knows if the project stalled or what. But the fact they even considered it is progress. (You can read the book, at least.)

In absence of any new films, I'll highlight two foreign military series, come belatedly to the US via streaming services: Our Girl from the British BBC and Sea Patrol from Australia's Nine Network. Both are currently streaming on Amazon Prime.

The first season of Our Girl follows young recruit Molly Dawes through her training and then on to her first tour in Afghanistan. There she becomes embroiled in local politics after befriending one of the girls from the village. The second season switches gears, focusing on the more experienced Lance Corporal Georgie Lane as her squad battles terrorists threatening a humanitarian mission in Kenya.

The change in locale and main character gives each season a very different tone. Molly is still finding her footing in the army and struggling to prove herself.  Though whiney at times, she's relatable and easy to root for. Her blooming camaraderie with the squad and friendship with the local girl make for deeper relationships that backstop the action. Georgie, on the other hand, is more of an enigma. She's competent and capable, but she keeps things tight to the vest. Even the glimpses into her backstory seem to tell us more about the characters around her than about herself.

In both stories, the action is understated and the focus more on the human aspects of soldiering. Each spends a fair chunk of time on the characters' families and the toll that their service takes on those relationships.  The drama can be soap-opera-ish at times, particularly the development of love triangles, but all-in-all it's a pretty grounded and engaging series.

Sea Patrol isn't technically set in a war, but there's action aplenty in this series about the adventures of an Australian Navy patrol boat crew.  They face down smugglers and terrorists, interdict rogue fishing boats, and rescue wayward sea travelers.

The characters are pretty strongly defined by their jobs, but over time each of them blooms into memorable, well-developed characters. It reminds me of Star Trek in this regard, thinking of how Sulu and Uhura grew into much more than just 'the helmsman' and 'the communications officer'.

At the center of the action is second-in-command Kate McGregor, who usually leads the boarding parties and assault teams while Captain Mike Flynn leads from the ship. Kate is smart, tough, and capable, but the show is not afraid to let her fail sometimes too.  The contrast between her by-the-book style and Flynn's cowbow leadership makes them excellent foils for one another.

There are a few other supporting female characters as well, including the navigator and (in later seasons) a few of the enlisted crew. While they don't get featured as much, it's nice to have the added representation.

It can be a bit of a slow-burn show at times, but definitely worth a look.