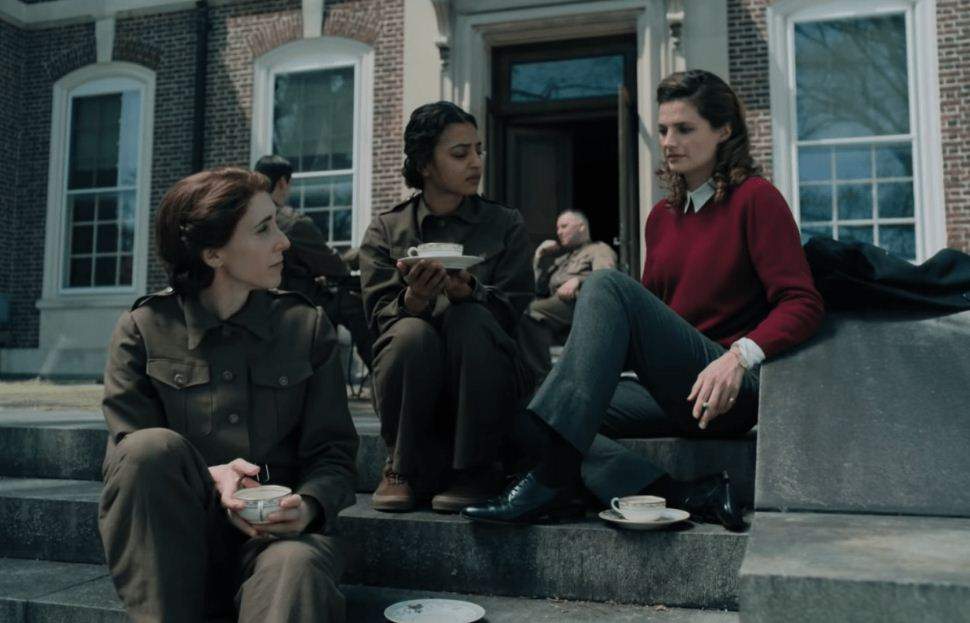 It's become an annual Memorial Day tradition for me to highlight women in war movies, in honor of the soldiers (of all genders) who have given their lives in our conflicts. This year, I'm featuring a pair of spy dramas.

A Call to Spy

Every year I search for promising movies for this list. Usually I just find the same dozen-or-so titles, most of which were made over twenty years ago. This year, though, I was pleasantly surprised to stumble across a new one: A Call To Spy.  (Great movie; goofy name.)

Khan was the first female wireless operator in occupied France, working for months even after the rest of her group had been captured. Atkins was known as the SOE's "spymistress", who recruited and prepared the agents for their missions. Hall was one of the most successful agents of the war, organizing resistance fighters, blowing up bridges, helping downed airmen, and relaying intelligence. All three were decorated for their efforts by England and France. Hall even received the Distinguished Service Cross, America's second-highest award for valor—one of the few women or civilians in history to be so honored.

Individually, any of their stories would make for a great movie. All together, though, the film feels overstuffed. Their epic adventures become abridged, and we don't get a good sense of the women as people beyond their brief character sketches. (Khan is a pacifist descended from Indian royalty; Hall wants to be a diplomat and lost her foot in a hunting accident; Atkins is under-appreciated and has been fighting to get her British citizenship). Tying the three stories together also requires taking some historical liberties, connecting the ladies more closely than it appears they were in real life.

Overall, though, the film does a good job depicting the French resistance operations: clandestine meetings, perilous radio transmissions, sabotage, prison escapes, informants. They're always one "papers please" encounter away from disaster. Where it falls a bit short is showing the real impact of their work. A few scenes of headquarters being impressed doesn't really do justice to how many lives they saved. Still, it's hard to quibble too much; I'm just happy to see these ladies getting their stories told.

Watching A Call To Spy made me want to re-watch Shining Through, which I mentioned in a prior installment was an old guilty pleasure of mine. I have to say, time wasn't kind to this one.

Back around 1993 when it came out on video, Shining Through was the first female-led spy movie I'd ever seen. At the time, it seemed pretty cool.  The main character, Lena/Linda, was brave, sassy, and clever.  "I might make a better spy than you," she quips to her boss after catching on to his secret activities.

Some of Lena's bumbling could be forgiven, given the hasty mission prep and her lack of training. She's not really a spy, and it shows. (Why the OSS can't find anyone better qualified for this super-important mission is probably the weakest point of the movie.) Other times, though, her actions are just downright boneheaded. Causing a scene in the fish market while trying to pass a secret message to her handler, searching for her Jewish relatives in hiding (To do what, exactly? she can't even get herself out of Berlin!), dragging the kids she's nannying to a secret rendezvous... it's almost like she's trying to get caught.

And the ending... (SPOILER ALERT)  Never before have I seen a movie render it's main character completely unconscious through the entire climax.  Just... why? Such a perplexing and maddening story choice. (The whole romance didn't hold up either by modern standards; Edward is too much of a jerk through most of the movie.)

I'll probably always have a soft spot for the movie personally. And while I don't think it was terrible enough to deserve the "Worst Picture" Razzie it got, I'm glad we have better women spy movies now.

Into the Spider-Verse Review