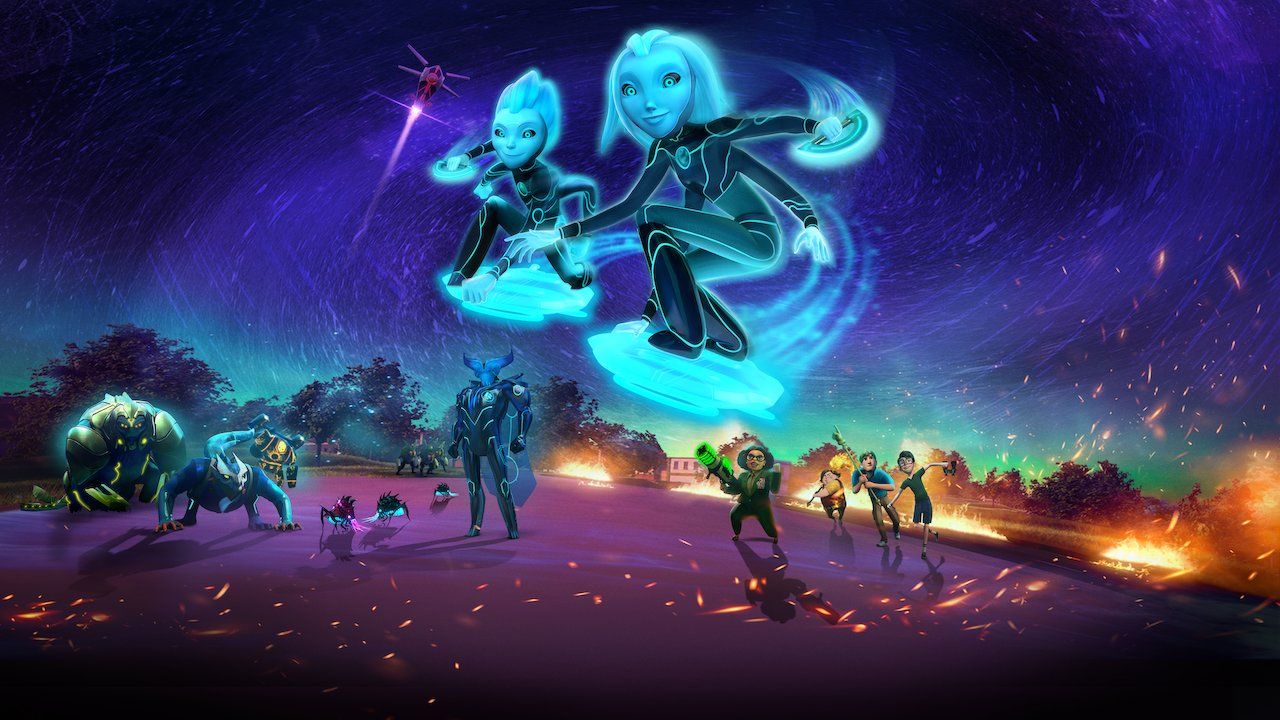 Colorful characters and elaborate world-building make for an epic storyline.

I'll confess, there were more than a few times watching the Tales of Arcadia trilogy that I was completely lost.  "Wait, they're teamed up now?"  "Hey, is that that same guy from before?" "How did they get there?" The stories are intricate, and they don't lend themselves to missing chunks of episodes while off doing Mom Things. Yet that complexity is also what makes it special.

Arcadia blends elements of fantasy and sci-fi together in a richly-drawn world filled with colorful characters. It isn't often that you see trolls, aliens, modern-day teenagers and the knights of Camelot all mashed up together. Each of the three series in the trilogy has its own distinctive feel, but they all fit together into a cohesive whole, carefully crafted by creator Guillermo del Toro.

Troll Hunters focuses on the adventures of Jim Lake, an ordinary high school student who unexpectedly inherits an ancient suit of armor that makes him the Troll Hunter.

The best part of Troll Hunters is the supporting cast. Claire (the girlfriend), Toby (the nerdy BFF), Blinky (the mentor), Stricklander (the teacher/villain), Steve (the bully)... they all start out as stereotypical archetypes, but they don't stay there. Each are fleshed out and often become heroes in their own rights. Claire in particular gets several prominent storylines that make her much more than just the love interest.

One of the things I adore most about the series is the relationship between Jim and his Mom.  Barbara Lake is the best cartoon mom character since Phoebe from Miles from Tomorrowland.  Single mom. Doctor. Smart enough to start piecing together what her son is up to. Knows Krav Maga. The way they support each other is brilliant.

"Even before you found this amulet... way before all of this... you were always my hero. My beautiful boy." --Jim's Mom

3 Below is my favorite entry in the trilogy. It focuses on Aja and Krel Tarron, alien  (though they don't like that word) siblings from the planet Akiridion-5 who are forced into hiding on Earth. Naturally, they wind up in Arcadia, the same town where Jim and company are hunting trolls.

The storylines from the two shows intersect several times, and it's just awesome how they handle it. Often we get to see the events from two different perspectives, or see easter eggs in one show referring back to the other. Top notch storytelling right there.

3 Below is the ultimate immigrant story, and contains some pretty biting tongue-in-cheek social commentary. The two siblings and their guardian take on forms that they feel will give them the best chance of going unnoticed–a woman, a Latino boy, and an elderly person.  It'd be funnier if it weren't so on point. For Aja and Krel, intolerance is often as much of a threat as the aliens hunting them.

Here again, the supporting cast is what makes the show so great. Steve and Eli from Troll Hunters are given a bigger (and often hilarious) role, and great warrior Varvatos Vex being trapped in an old man's body leads to some priceless hijinks.

I didn't like Wizards as much as the other two series, but admittedly I missed more of it than the others and didn't know what was going on half the time.

The Troll Hunters crew time travels back to ancient Camelot, where they team up with their friend Douxie (a minor character in Troll Hunters, here becoming the main protagonist) for...reasons? (I told you I missed a lot.)

There were some cute moments, particularly with Steve—the former bully—taking knight lessons from Lancelot. We also got to see several prior characters and events from different points of view. And it was a rare time travel story with a closed time loop, which just goes to show the meticulous planning that went into designing this world.

Arcadia is a great show for the late-elementary/tween crowd—complex enough to hold their interest, serious enough that it doesn't seem too childish.  Each season builds up to an epic (and often moving) finale rivaling some of the best live-action shows. The rich world and characters weave together seamlessly.

Netflix is uniting all three of the casts for one final movie, to air this summer, and it should be great.

For All Mankind - Season 1 Review