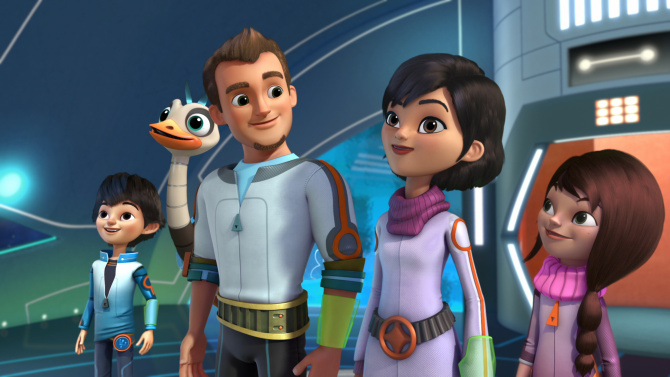 As a mother of two, I'm always sensitive to the messages in the shows they watch. Disney Junior's latest original cartoon, Miles From Tomorrowland, presents a world where:

What's not to love?

The series follows the Callisto family, who travel the galaxy doing missions on behalf of the Tomorrowland Transit Authority (or "TTA" - a nod to Disney's Tomorrowland.)

Although 7-year-old Miles is the titular character and star of the show, every member of the family is given a chance to shine. Mom Phoebe is the captain and a well-respected member of the TTA. Dad Leo is the engineer and pilot, and big sister Loretta is a budding scientist and programmer.

In an interview with GeekDad, Miles' creator Sascha Paladino explained that the decision to present strong female characters was baked into the show from the start:

The first decision was to make Miles’s mother, Phoebe, the Captain of the crew, which also happens to be her family. She keeps things running both literally and figuratively in the show. Miles looks up to his mom, telling her he hopes to be just like her.

Also in the show, Loretta is really interested in science and technology. We decided that her character would also be a computer coder. Making that decision, we were invited to the Google campus to get their feedback and speak with other female coders. Miles thinks his sisters coding is one of the coolest things ever.

The boys have great role models too. Miles makes mistakes, but his heart's always in the right place and he's curious and fearless. Leo's a loving dad who can fix anything and loves nebula-surfing. His brother, Uncle Joe, appears now and again as an intergalactic police officer.

With consultants from NASA on board, the show tries to incorporate at least one science fact in each episode. Paladino says, "We try to tie this in with a very fantastical version of outer space, with fictional planets made of sand and water mixed in with real places like Io. We’re trying to find a balance between science facts and the fantastical to inspire kids to learn more."

The clever incorporation of alien species encourages kids to embrace diversity, and the show is chock full of positive messages around responsibility, good citizenship, teamwork and more.

Emily Ashby from CommonSenseMedia writes, "Juxtaposed against big adventures are more low-key scenes of the family sharing a meal and planning their day. These simpler moments serve to remind kids that, although adventures on a grand scale are great, coming home to loved ones is a joy as well."

Miles from Tomorrowland airs weekdays on Disney Junior. You can find fun Miles-themed games, videos and activities at DisneyJunior.com.