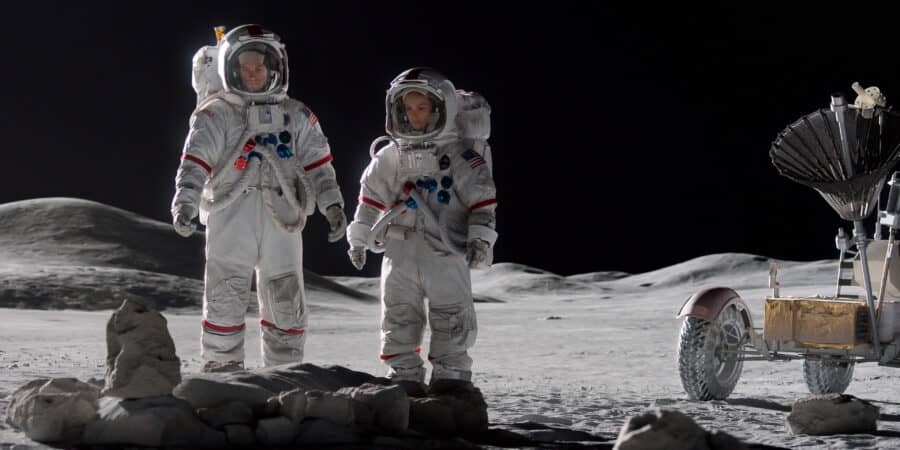 An alt-history drama explores what would happen if the space race never ended.

So I logged in to cancel my Apple TV subscription, having not watched anything on it since finishing season 1 of For All Mankind late last year. There I discovered that season 2 was now out! And I also remembered that I had never reviewed season 1, so here we are. A new blog post and a still-not-cancelled Apple TV subscription. (At least not until I'm done with season 2.)

Mankind has an interesting alt-history premise: What if the Russians had beat America to the moon? The Apollo 11 mission, instead of being a triumphant victory, was a near-disastrous runner-up. From there, the US rushed to play catch-up, and the space race never ended.

The show has a more diverse cast than one might expect from its 1960's NASA setting. Early on, Russia scores another win by putting the first female astronaut on the moon. NASA follows suit by recruiting its own female candidates. While people of color are still unfortunately scarce in the story, there is a Black female "computer" (ala Hidden Figures) and a young Hispanic girl interested in space engineering. Discrimination is still very much an obstacle for everyone, but at least in this alternate timeline they have some seats at the table.

Focusing on fictional NASA astronaut Ed Baldwin, Mankind mingles real and imagined characters from the astronaut crews, ground control, and their families. A lot of attention is paid to the behind-the-scenes of the missions and the private lives of the astronauts, making it more drama than space adventure.

There's still a fair bit of adventure, though, including dramatic space rescues, crews running out of oxygen, training accidents, and the other usual NASA story fare.  What makes it stand out—apart from the unique setting—are the characters.

The show does a good job of portraying their astronauts as people first. One of the first times we see Ed, he's causing a PR nightmare for the space program by telling a reporter that NASA's lost its nerve.  This lands him in hot water and he has to claw his way back in. It's a far cry from your typical 'astronaut hero' storyline. His buddy Gordo has surprising depth beyond his 'hard-drinking ladies man' surface, especially when his pilot wife tries out for the space program too.

The other main astronaut, Molly Cobb, is a sharp contrast to Ed's stern stoicism. Part of the cancelled "Mercury 13" female astronaut candidate program, she's got a chip on her shoulder and doesn't much care for all of the PR stuff that comes with being an astronaut. She just wants to fly. Her struggle to live up to the responsibilities of the position and be a team player make her a great, if not always likable, character.

Meanwhile, engineer Margo Madison battles sexism in flight control as she tries to climb the NASA ladder. She's another well-rounded character, both imperfect and admirable. The families waiting with bated breath while their loved ones are in space get their due as well, particularly Ed's wife Karen.

Like Battlestar Galactica and Outlander, two other shows helmed by Ronald D. Moore, Mankind can be downright brutal to its characters. There were a few scenes and stories in the latter half of the first scene that hit with an emotional ton of bricks. Don't come into it expecting feel-good NASA heroics. This is a grittier, darker space race, and it's pretty darn good.

Side note: Mercury 13 was a real NASA program I somehow never heard about before this show. (Seriously, how is this not more well-known!?) Molly is inspired by real-life aviator Jerrie Cobb, the first American woman to pass NASA's astronaut qualification tests. Ellen Stofan, former chief scientist of NASA told space.com, "The women of the Mercury 13 should have been just as famous [as the Mercury astronauts]. They should be inspiring girls today … they should have been there to inspire me."

Also, if you haven't heard the story of the amazing Katherine Johnson, whose mathematics was behind the US space program, check out Hidden Figures.

Finally, you can also check out the story of Margaret Hamilton, one of NASA's early software engineers who helped save the moon landing.

Keeper of the Lost Cities Review