This creepy love story should have been left in suspended animation.

A sci-fi thriller/love story with Jennifer Lawrence and Chris Pratt? You have to really work at it to make me not love that movie, yet somehow they managed it.

Passengers starts off interesting enough. On a sleeper ship bound for a distant colony world, a malfunction wakes up mechanic Jim Preston ninety years too soon. With echoes of The Martian, Jim (Pratt) spends a year trying (and failing) to find a way out of his predicament. Eventually he resigns himself to his fate, his only companion a cheery android bartender.

Along the way, he develops a stalker-ish infatuation with one of the other sleeping passengers - author Aurora Lane (Lawrence). He struggles with his conscience, but eventually loneliness gets the better of him and he sabotages her sleep pod to wake her up.

It's not a bad setup for a sci-fi morality tale. The movie does a good job portraying Jim's desperation and guilt. But then it gets kind of creepy. 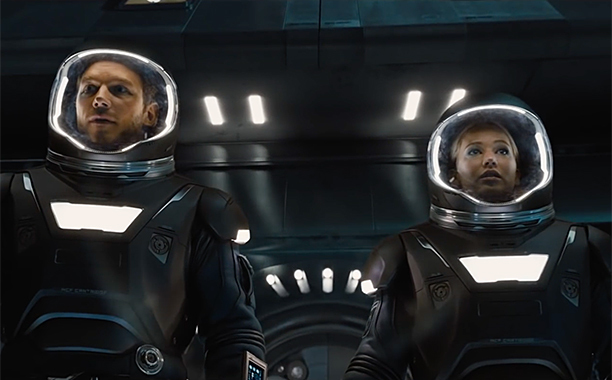 Being literally the only two people in their world, it doesn't take long for Jim and Aurora to become friends and then lovers. With a different slant, this could've been played as a really interesting stalker thriller, building up to the point where Aurora eventually finds out the truth and confronts him.

It also could've continued the morality play thread, with Jim coming to terms with what he'd done and either struggling to live with it or trying to redeem himself.

Instead, what we get is a movie that tries to hit all the notes of a conventional romance, glossing over the disturbing undertones of how said romance started. Although there is a bit where Aurora learns what he did and is justifiably pissed off, we never really get a satisfying resolution to that central conflict. The movie is too busy veering off on an action movie tangent where Jim gets to play hero and save the entire ship while Aurora holds a flashlight.

Okay, okay, I'm probably being a little unfair there. Jim does need her help to vent the reactor, and she rescues him from space. But I do think the movie would've been stronger if it had given her some kind of useful skill.

Many reviewers have grabbed their pitchforks and accused the movie of promoting rape culture. I wouldn't go that far. What Jim did was a despicable, selfish act, but I don't think the movie ever tried to paint it as otherwise.

At one point, Aurora likens what Jim did to murder, and Jim doesn't disagree. She is allowed to have her righteous anger; there's no snap-your-fingers forgiveness to be had here.

There's also at least some attempt made to redeem Jim. He tries to sacrifice himself to save the ship, and then later offers to sacrifice his own happiness by putting Aurora back to sleep in the Autodoc.

That Aurora ultimately chooses to forgive Jim and live out her life with him was, undoubtably, a questionable resolution. I can see why some saw this as rewarding Jim for his horrible deed. But what was the alternative? Kill off Jim and condemn Aurora to 90 years of solitude? Put her back to sleep and leave Jim to die alone? Maybe it's what he deserved, but I doubt audiences would've been particularly thrilled with that ending either.

Although it was kind of squicky, this ending felt like the lesser of several evils. It did, ultimately, give Aurora agency over her own fate.

I guess there are worse things than spending ninety years alone with Chris Pratt.