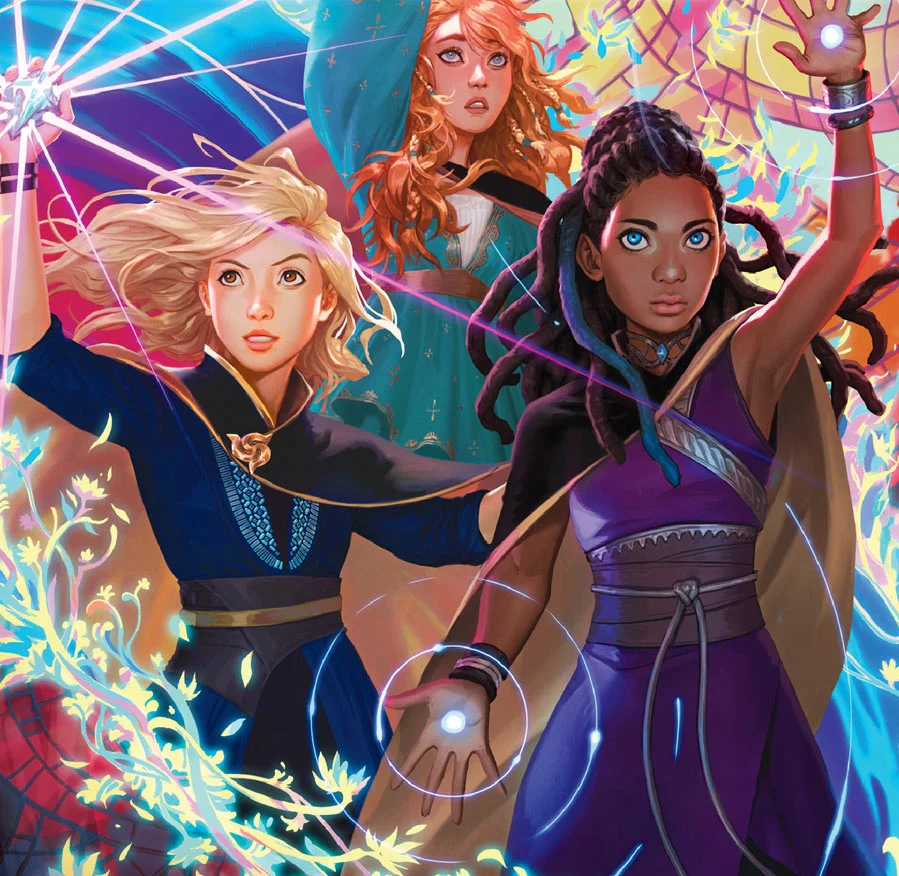 An exciting YA series that entertains the grown-ups as well as the teens.

After hearing my daughter rave about Shannon Messenger’s Keeper of the Lost Cities novels for the past year and a half, I had to check it out for myself. I wanted to learn what kept her coming back to devour book after giant book (some topping 800 pages) in this young adult series. I just finished reading all nine(!) books, so I thought I'd add my own review to hers.

In the first story, twelve-year-old Sophie Foster is whisked away from a school field trip to a hidden world beneath our own. These “lost cities” are ruled by elves who look and act a lot like humans, and Sophie learns that many of Earth’s fantasy legends are based on whisper-down-the-lane versions of elvish reality. She encounters fierce warrior goblins, adorable plant-like gnomes, dinosaurs, unicorn-pegasus allicorns, and more. And she learns that she is an elf herself, embedded with a human family for reasons that unfold as the story goes on.

Many of the elves have superpowers—Sophie’s main one is telepathy—and she soon winds up at Foxfire, an elvish version of Xavier’s School for Gifted Youngsters. The first book is definitely the strongest, with Sophie struggling with relatable teen angst (fitting into a new school, making friends, having a crush, finding her place in the world) while also coming to terms with her powers, her adoptive elvin family, and her connection to a secret rebellion who may or may not be the good guys.

The first book is tightly plotted, and both the world and characters are well-developed. Sophie, in particular, is easy to root for. She’s courageous and resourceful, while also showing moments of vulnerability. As the books progress, she grows not only in age but also in confidence, developing into a real leader and heroine.

There’s a love triangle, of course, which I’ll rant about more in a moment, but that’s pretty standard in YA fiction. At least both the boys here are decent.

The supporting cast has a number of wonderful characters as well.

The first few books really held my interest, with a good mix of drama (homesickness, Sophie struggling with her classes and feeling like a fish out of water), adventure (kidnapping, chases, narrow escapes), and mystery (who among the competing factions can Sophie trust? what’s behind the fires in the human lands? why was Sophie hidden among the humans?). Definitely excellent reads.

Somewhere in the middle of the series, though, the stories started to feel a bit tedious. I’m still invested enough to see it through to the end, but I’m not enjoying the later books as much as the earlier ones. I may be in the minority, however. My daughter still awaits each new release with the fervor of a die-hard fan. She devoured the most recent entry, Stellarlune—all 736 pages of it—in about two days.

Now, on to some rants that I will keep below a spoiler tag. Feel free to jump right to the conclusion if you’d rather avoid the spoilers.

SPOILER ALERT! This section contains mild spoilers for books through Stellarlune. Skip to the conclusion to avoid them.

It’s par for the course that most YA series will have a love triangle. I wouldn't mind it so much if it didn’t become more and more the focus with each passing book. Still, I can appreciate that neither of the relationships are completely toxic, and there was a slow-burn approach to both.

In KoTLC, the “legs” of the triangle are Fitz and Keefe. Fitz is the “golden boy”, from a rich and powerful family. He was the first person Sophie really connected with in the elvin world, and her first crush. Keefe is the roguish “bad boy”, but his empathy power gives him a unique compassion that balances his troublemaking nature.

Each boy has critical flaws that IMHO make them both problematic suitors for Sophie. Fitz is entitled and selfish, prone to pouty tantrums when he doesn’t get his way. He pressures Sophie relentlessly to find her biological elvin parents (to appease the elves’ dumb matchmaking system), even after she explains the importance of them remaining secret. Keefe, in turn, suffers from profound insecurity and self-loathing after a lifetime of emotional abuse from his parents. He is prone to moments of insane recklessness and dumb decisions, especially where his evil-mastermind mother is involved.

Neither of them is irredeemable. They're still teenagers, so they have room to grow. In the most recent book, Fitz takes some steps to at least acknowledging his mistakes. Keefe has always been Sophie’s rock, and even his worst decisions are rooted in a desire to do the right thing. If either of them could work through their issues, they might be good for her. In the meantime, with a fandom divided between “Team Fitzphie” and “Team Foster-Keefe”, my daughter and I are “Team Sophie.”

Another major issue with the later books is the pacing. In Flashback, Sophie spent most of the story confined to a hospital bed. In Legacy, it felt like the characters spent half the book following leads that went nowhere. In Stellarlune, endless debates and bickering really distracted from the story.  The earlier books were gigantic, but they didn’t drag; the latter ones just feel overstuffed. There are so many red herrings and neglected plot threads that I can’t even keep track of the main mysteries any more, undercutting the impact of major reveals.

Which brings me to the main problem: the villains. There’s only so many times you can drag out the “main villain is captured/incapacitated/thought-dead and miraculously escapes” trope before it starts to get old. And while Sophie and her friends do have some key victories thwarting the Neverseen (saving the Atlantis dome from cracking and flooding the city is my personal favorite), it does get a bit frustrating how often the heroes’ plans just… fail.

On the whole, KoTLC is a solid series with enjoyable characters. Despite her flaws, Sophie is a great role model. She cares about others, even different species, and always tries to do the right thing. Though her will-they-won't-they drama with Fitz and Keefe consumed entirely too much of the later books for my liking, it's balanced by solid friendships with both boys. Sophie also has interesting relationships with other characters, including her adoptive parents, Biana (Fitz's sister) and Linh (a girl exiled for having trouble controlling her powers). I look forward to finding out where the series goes from here.

For All Mankind - Season 3 Review