Huntsman: Winter's War was much more fun the second time around.

I gave Huntsman: Winter's War a lukewarm review when I saw it in the theaters last summer. But watching the DVD release over the holidays, I found I enjoyed it much more the second time around. In fact, I'd have to say it was my favorite movie of 2016.

Why the dramatic turnaround? It all comes down to expectations.

The War that Wasn't

When I first saw the movie, I was expecting a serious, epic fantasy war movie. That's sure what the trailers implied, with lots of shots of big armies and lines like, "The mirror's power is the ultimate prize in a war fought by two mighty sides." I was disappointed to get something completely different.

But having watched some of the behind-the-scenes footage, I now realize that the filmmakers were never trying to make a war movie in the first place. They were aiming for a more light-hearted adventure tale interwoven with a love story. In that, they succeeded. And the cast certainly seemed to have a blast doing it, judging from the interviews and the gag reel.

The movie actually reminded me of Willow (one of my favorite movies when I was a kid) in its blend of romance, adventure and fantasy. It's funny because Jessica Chastain told Radio Times that's part of what drew her to the role:

“There’s a movie from my childhood that I loved, Willow. I remember that red-head badass warrior Sorsha. When I was a little girl I wanted to grow up to be Sorsha, so it was like, ‘This is my chance!’”

Sorsha rules! Ahem. (Also how cool is it that Chastain admits to loving Sorsha and Sarah Connor?) 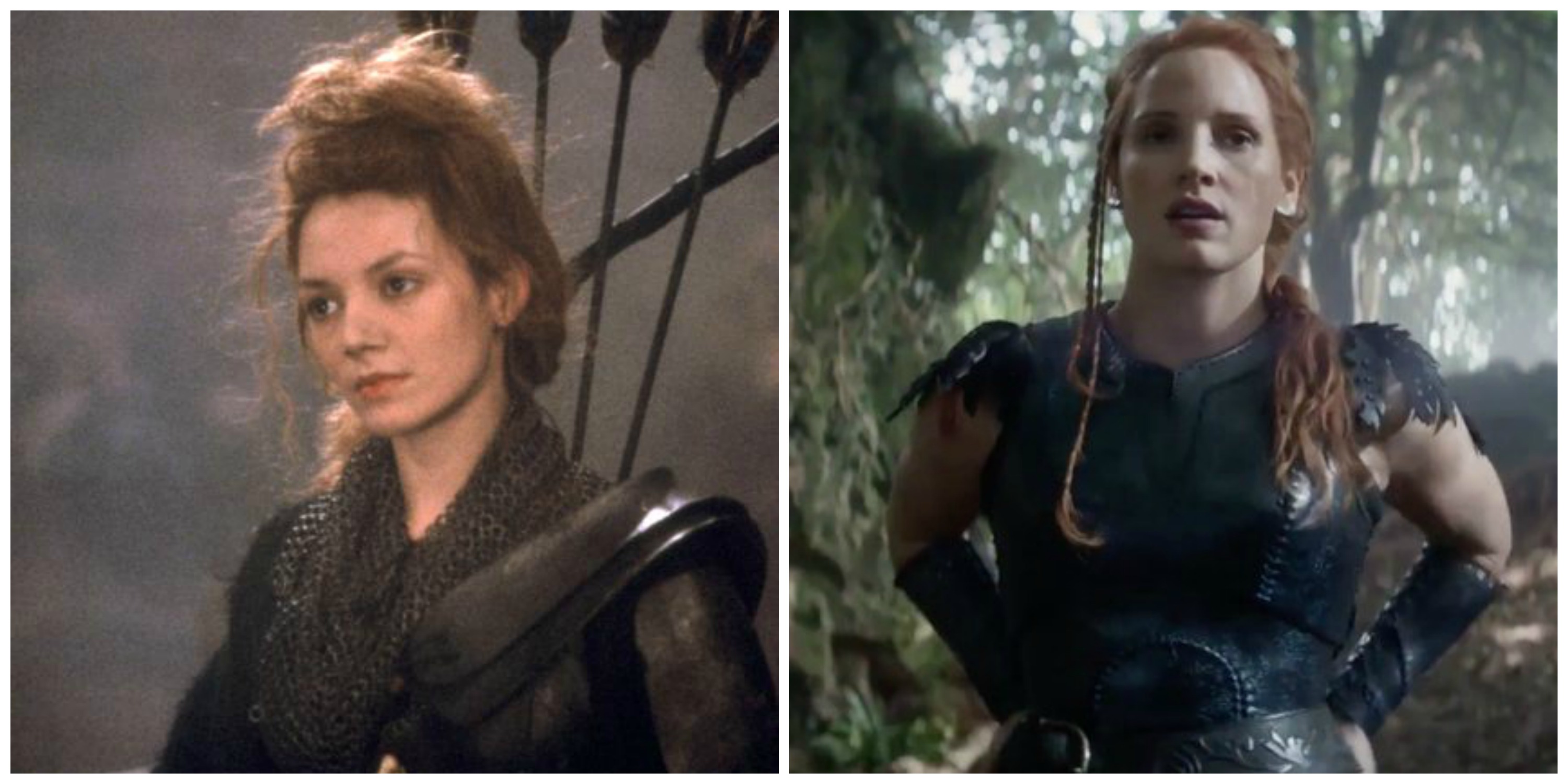 I did like how the love story in Winter's War didn't follow the traditional tropes. Jessica Chastain told Nerdlist how she loved that it showed a more modern relationship:

"If you look at a lot of original fairy tales, it's the damsel in distress. She's looking for a prince charming - letting down her hair and he's going to climb up it and save her. I don't relate to that. I hope that a lot of girls don't relate to that. What's great about this film is that they're equals. They're both incredible fighters on their own, and they're even better when they're together. I think that is what a modern healthy relationship is, and I hope girls see the film and take that away from it."

Putting them on equal footing is definitely the movie's strength. It's Sara who pursues Eric initially, and hatches the plan for them to escape Freya's kingdom. There are many indications that she's the better fighter - Freya's favorite. There's even a great line later in the film, after Eric asks what she wants him to do to prove he still loves her:

"You think it's about you. What you should choose. What you should do. I'm just waiting here for the man to pass a test and you did, so now I have love you. But I don't. I choose for me. Not you."

In the end she chooses him, and that's cool. You can be a kick-ass character and still fall in love.

Shipper fan video of Eric and Sara by Mrseclipse555 that amused me:

In the end, I think what bothered me the most was right there in the title: This was the Huntsman's movie.

Now don't get me wrong, Chris Hemsworth did a fine job, and I really do enjoy his movies. But Eric was the least interesting character in this film.

Freya: All her life, she's lived in her sister's shadow, wondering if she'll ever have the same powers. Her baby is murdered by her lover, her powers are revealed, and she exiles herself from her kingdom to the land of ice and snow. She raises and army of child soldiers and makes them her surrogate family, loving them while at the same time banishing love. She conquers a vast empire. But then her two favorite warriors betray her by falling in love, and her believed-dead sister returns and tries to usurp her kingdom.

Sara: Ripped from her beloved mother, she's forced into Freya's army as a child soldier. She falls for one of the other soldiers despite Freya's prohibition against love, declares him her husband and makes plans to run off. Freya catches them and makes her think he's left her, then locks her up. Years later, she's released and forced to do "unforgivable" things in Freya's army. Freya tells her that Eric is alive, and that Sara must use him to find the magic mirror and then betray him.

These are awesome characters with awesome stories (even Ravenna, omitted for brevity), each deserving of a movie in their own right. But here they're all playing second and third fiddle to the Huntsman's "save the kingdom and win back the girl" story we've seen a million times before. The movie has set Sara up as the better fighter, but does it let her and Eric team up to take down Ravenna at the end? Nope, she gets knocked out and Eric has to do it all himself. (Much like Willow. Hmm...)

Winter's War was fun and cool, but it had the potential to be so much more. Still, when you get three A-list award-winning actresses together in one fantasy movie and let them do stuff like this? I'll take it.

Six Shows to Get Girls Excited About STEM