Timeless pulls out all the stops for an epic season finale.

SPOILER ALERT! This review contains spoilers for the latter half of Timeless' second season - including the season finale. Don't read until you've seen the episode.

The episodes leading up to Timeless’ second season finale were, frankly, awesome.

The Time Team brought a young JFK back to the future to save him, and in a poignant twist he reads his own Wikipedia article and learns about the tragic fate of himself and his siblings. Sadly, it's not enough for him to change his future.

Mason finally got to go on a mission, where his love of blues helps him to save rock and roll (and the counter-culture movement) by ensuring Robert Johnson records his influential blues album. “That’s my yeah!” Mason realizes, awestruck, after they get back to the future and he listens to himself on the 80-year-old album he helped to produce.

The team crossed paths with Grace Humiston - aka “Mrs. Sherlock Holmes” - during the height of the women’s suffrage movement. This episode also had a great twist, with Emma temporarily rebelling against Rittenhouse because she wasn’t keen on her boss’ goal to put women back into the kitchen. This is what happens when you put a guy with 1915 social values in charge of your evil organization, Emma.

Next the team had to save one of their own, when Rittenhouse targeted a young Agent Christopher in the ’80s. This one led to some great scenes, with Lucy and Jiya trying to encourage Christopher to follow her own dreams. The moment when Lucy busted out the iPad to show Christopher her future, and she realized the possibilities… sniff. Agent Christopher began the show as a pretty one-dimensional “boss” figure, but this episode highlighted what an integral part of the Time Team family she is.

Finally, you can never go wrong with a badass Harriet Tubman leading a slave uprising. “Wow. Harriet Tubman is hard-core,” Rufus says in awe. I can’t say enough about how much I love the way the show shines the spotlight on great historical women and people of color.

It All Comes Down to Chinatown 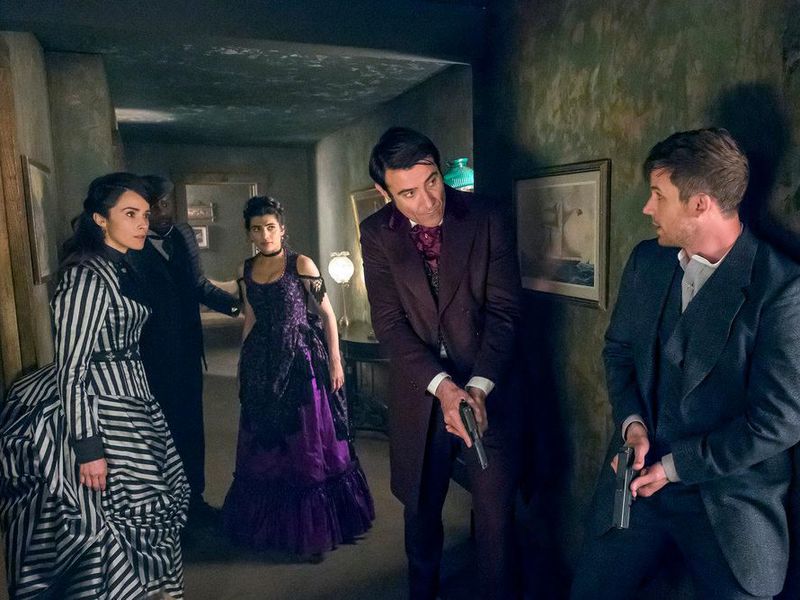 All the threads that had been woven throughout the season came to a head in the final episode.

Jessica is revealed to be a Rittenhouse agent, cracking the Time Team’s trust in each other. This leads to some great moments - Flynn and Wyatt in a fistfight; Rufus calling Wyatt out on his soap opera nonsense; Wyatt confronting Jessica - twice! - with neither of them able to shoot the other... the Jessica storyline has definitely brought some great drama to the team. Nicely done, Timeless.

Jiya, once relegated to comic relief and tech support, gets a truly awesome story. She's kidnapped, escapes, steals back the lifeboat, but gets stuck in 1880’s Chinatown for three years. The rest of the team’s frantic searching discovers a coded message she left for them in Lucy’s book (in Klingon no less - this show is rife with Geek Love), enabling them to find the Lifeboat. But when the team comes to rescue her, Jiya refuses to go with them. Her visions - which it turns out are really just another form of time travel - have convinced her that Rufus will die if she does. What a dilemma!

Emma finally gets tired of Carol and Keane’s shenanigans, guns them both down, and takes over Rittenhouse. Dang. That was awesomely abrupt. Timeless has developed a great, complex villain here.

Despite a brief reprieve when Jiya saves him from the yellow-toothed goon, Rufus is shot by Emma and dies anyway. Noooooooooo! This show had better not leave him dead. Rufus rocks.

All of this leads to mild-mannered history professor Lucy finally reaching her breaking point, grabbing Wyatt's gun and chasing after Emma. In a really well-acted scene, Lucy wrestles with whether she should put a bullet in Emma’s head and - surprisingly - decides to do so. I love how the season has given Lucy more depth. It was a very organic character arc. Shame the gun was empty, but not only did that give us an epic brawl scene with them duking it out (in 18th century garb even), it sets up a bitter rivalry for next season.

And then that ending… wait, what? Two lifeboats? Future Wyatt and Future Lucy? Wow.

Everything really came together beautifully. The show found its stride by focusing on the characters and their relationships, with the “history mission of the week” just being a backdrop for the people-driven drama the fans really care about.

Timeless is on the bubble again (sigh), with NBC weighing its cancellation. I hope they give it another season, because this one really set up some great plot threads. Either way, at least Timeless gave its best shot and ended the season on a great note.

Some other random highlights: