Is Princess Leia the original self-rescuing princess or a sexist trope? Or both?

Like many girls of my generation, I adored Princess Leia. While most genre films and TV at the time featured women as so much window-dressing, Star Wars had a tough, smart, blaster-wielding princess. But as I watch the Star Wars films with my son and daughter, I can't help but look at Leia with new eyes - their eyes.

"Mom, why aren't there more girls in Star Wars? It's not fair."

Trying to explain the Hollywood gender gap to an indignant 7-year-old is a losing proposition, so I just nod. "I know. It's kind of silly, isn't it?"

Leia is, literally, the only female character in the original trilogy to get more than a minute of screen time. This amusing (and NSFW) video from Cracked.com highlights just how awful the Star Wars universe is for women. 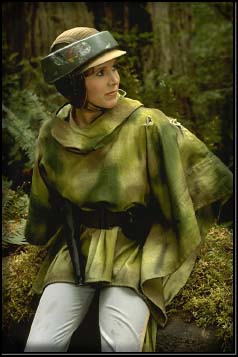 But Leia rises above all that. She's a respected leader in the rebellion. She stands up to Darth Vader without flinching. She picks up and carries on after her entire planet is blown to bits. She fights alongside the guys and demonstrates her resourcefulness on more than one occasion. She goes on a daring mission to rescue Han and strangles Jabba the Hutt with her own slave-chain. She gets captured a lot, but to be fair - so do the guys. She's awesome.

"Mom, why does Princess Leia keep changing her hair every five minutes?"

And yet despite how awesome she is, Leia's role in the story is to play second fiddle to the guys. She's the girl to be rescued, the sister, the love interest, the path to redemption. Never does she really get to have her own storyline, though she does have time to change her clothes and hairstyle a lot. And don't even get me started on that degrading slave bikini.

Maybe it's not really fair to view a thirty-year-old movie with modern-day expectations. George Lucas could have made Leia into a stereotypical damsel-in-distress, but he didn't. Still, it's hard to ignore the blatant sexism that pervades the films. 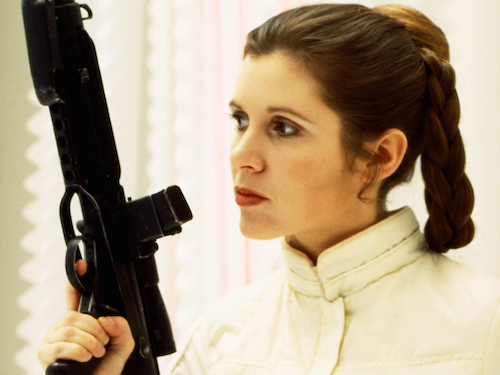 What's more disappointing is that attitude extends to real life as well. Star Wars is so mainstream now that arguing it's intentionally marketed just for boys is both silly and insulting. The 501st Legion, the epitome of Star Wars fandom, reported 20% female membership in 2013.

That's a pretty healthy female fanbase, but good luck finding a T-shirt or pajamas for your young female Star Wars fanatic. It took a social media petition to make Disney promise to add more Leia action figures. Even when they (supposedly) did, what's the only one available at my local retailer? Slave Leia. Sigh. What message does that send to young girl Star Wars fans? Or young boy ones, for that matter?

I still think Leia's pretty awesome, but I also can't blame my daughter when she'd rather be Sabine.

Falling Skies - Ladies of the Apocalypse