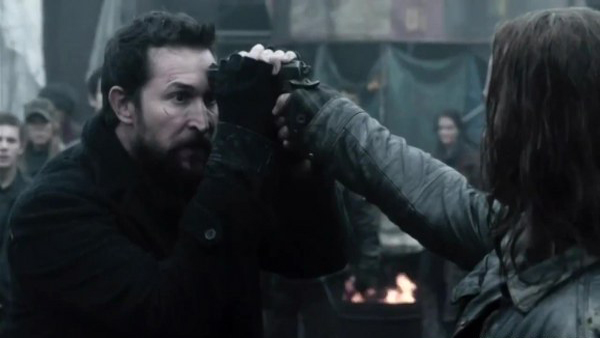 An uneven episode sets up the final Pope/Tom showdown.

In last night's episode, we saw the fallout from Tom's decision to prioritize the assault on the Skitter factory over Sara.

It is not at all surprising that Sara's death has sent Pope off the rails. What's surprising is how easily Pope is able to muster people to his side with his vitriol. Ninety percent of humanity has been wiped out, but somehow the 2nd Mass' deaths in the war are all Tom's fault? In one breath Pope snarls that the Mason family "doesn't have a scratch on them" and in the next he's accusing Tom of flying "his own daughter to her death". Make up your mind!

One of those who falls under Pope's spell is Anthony. Faster than you can say "PTSD", we've gone from a believable traumatic reaction to full-blown psychosis. Weaver relieves him of duty, and in the span of 24 hours this stalwart, loyal member of the 2nd Mass proclaims his hatred of the Masons and conspires to murder his good friend Anne. Come on.

As an aside, where was Maggie during all this? Given her past conflicts with Pope, her absence this episode was glaring.

The episode's "B" plot involved Cochise suddenly coming down with a terminal condition akin to kidney failure. This storyline had promise, and I liked the fact that Anne got to do something medically-challenging, but the entire plot made no sense. The Volm are an advanced space-faring species whose medical technology has featured in the show before (Remember the spike-removing machines? The eye-worm scanners?) but they have no doctors? What??

And to go from "Volm have these organs that are sort of similar to human kidneys" to "let's have a human do the first-ever Volm 'kidney' transplant with absolutely no knowledge of Volm physiology and only the flimsiest guess that it's even possible" ... I have no words. It's such a preposterous leap in logic that everyone involved comes off as certifiably insane.

One semi-good thing came out of that hackneyed storyline: People finally talked about Lexi! But even that fell flat. Instead of having a nice scene where Ben and Anne work through their mutual grief, we get Ben acting indifferent and Anne "coming to terms with Lexi's death" by staring silently at a Volm. No amount of sad string music can make that okay.

There were a few bright points in an otherwise dismal episode:

Here's hoping that the final resolution of Pope and Tom's journey is better than this muddled mess.