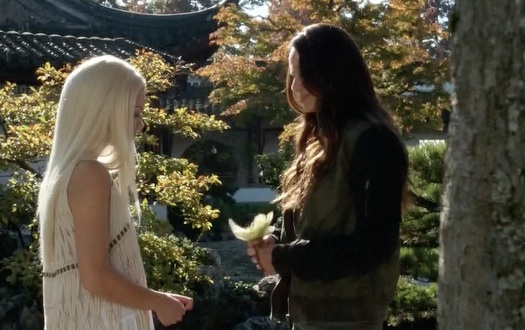 I knew the Falling Skies writers had to do something to explain how a kid with two human parents ended up being half-alien, but I must admit their story still has me scratching my head a little.

The promos for "Exodus" promised a "flashback to Anne's time in the Espheni Tower." What we got was the creeptastic image of The Monk and Karen monkeying around with the yet-unborn Lexi's DNA.

At first I thought this was a gaping plot hole, because Anne had already given birth to Lexi when Karen captured her. But then in "Door Number Three" we see Anne again in the tower, this time with Karen referencing her flight from Charleston.

So I guess she was captured twice, then? Once during the S2-S3 time jump and again later in S3? Ooookay. It begs the question why nobody in the 2nd Mass noticed that the pregnant first-lady head-doctor of Charleston went missing the first time.

Maybe EyewormLourdis helped somehow. "Oh, you're looking for Anne? Yeah she's taking a nap (in the Espheni tower with Karen, ahem)." Let's also gloss over why Karen would then let Anne go back to Charleston. Why let her precious AlienBaby creation out of her sight?

Apart from those strange plot wranglings, I'm still happy with the season so far. Grizzly-Mama Anne grew on me more once she got to Chinatown and stopped treating her own people like crap. I liked how she came to question the Monk prepared with a big ol' board, ready to lay the smack down if he didn't cooperate. Pragmatic. I would've liked to see a scene with Anne and Ben at the end. "So, hey, sorry about accidentally beating you half to death. Let's not mention this to your dad, okay?" Awkward.