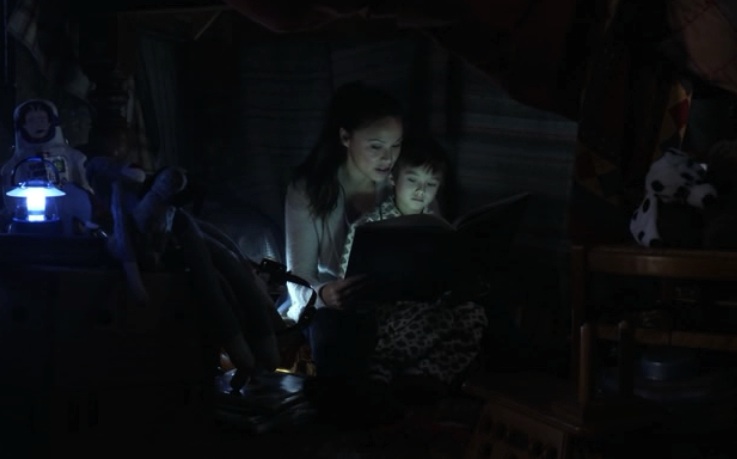 This week, Falling Skies gives us a heartbreaking glimpse into Anne's old life as she tries to save Lexi.

Last time I posted about Falling Skies, I lamented the lack of a scene between Anne and Ben. This time the one I wish we'd seen was Anne's reunion with Matt. When we last saw them together, Matt was asking to call her "mom" and she was starting to treat him like a stepson. It would've been nice to see some acknowledgment of that bond, but alas... there are only so many minutes per episode.

But on the topic of sons... SAMMY! It was a sweet yet heartbreaking glimpse into Anne's old life. Though some recaps have described it as being pre-invasion, I think the camping lanterns and motley collection of water bottles and first aid kit on the table place it instead during the early days of the war.

That was kind of a crappy last bedtime story, though. Dang.

Peter was not quite like other boys; but he was afraid at last...Next moment he was standing erect on the rock again, with that smile on his face and a drum beating within him. It was saying, "To die will be an awfully big adventure." - Peter Pan

I did find it interesting though how the writers seem to have changed Anne's backstory. I recall in Season 1 interviews Moon Bloodgood said that Anne had been working at the hospital when the attacks started, and that's how she survived but her family did not (and also why she didn't have anything of Sammy's for the memorial wall).

At any rate, the parallel between "I couldn't save him... I can't save her" does goes a long way to explaining why the good doctor has taken a slight detour to Crazytown this season. I think both the writers and Moon Bloodgood have doing a fine balancing act in making her appear desperate and judgment-impaired (Cutting open the coccoon? Really, Anne?) without being Pope-and-The-Berzerkers insane. It'll be interesting to see how it plays out if Lexi doesn't deserve the benefit of the doubt everyone is giving her.

Falling Skies - Who's Your Daddy