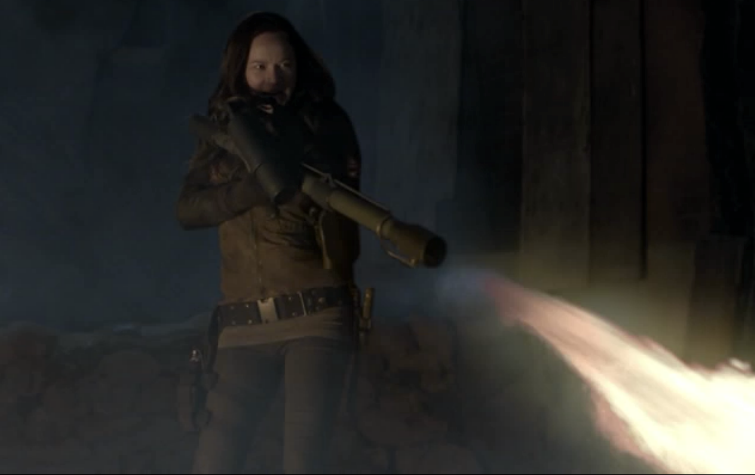 The Falling Skies fourth season finale is an uneven episode to cap an uneven season.

The first half of the finale centered around Lexi's desire for redemption. It made sense for the majority of the 2nd Mass to hate her, but Ben had gone into enemy territory to save her just a couple episodes earlier. I didn't expect him to welcome her with open arms, but guarded hope or even a snarky "told you so" would've made more sense than angry disdain.

And Anne. Goodness. Are we really meant to buy that Miss Obsessed-With-Saving-Her-Daughter-All-Season would so utterly shun Lexi now that she was back begging for another chance? Really?? After ranting and raving at Tom about his lack of faith just one episode before? I get that she felt hurt and betrayed, and maybe even a little scared of Lexi, but her dismissal felt ridiculously out of character.

I blame lazy writing, because it would've only taken a couple of tweaks to the dialogue to make the reaction more authentic, without actually changing the plot any. "I want to give you another chance, but it would drive the 2nd Mass apart, and you wouldn't be safe from them. For everyone's sake you have to go, and I have to stay." Equally tragic, but far more sensible and in-character than "you made your choice, live with it".

Plus, it would've made her sudden acceptance of Weaver's plan more palatable too. If she believed and trusted Lexi, she could see it as a way for Lexi to prove herself to the others, save Tom, and give them a chance to be together. As it stood, allowing Lexi to go on the mission felt incredibly boneheaded. "We don't trust you. You have to leave. Oh, wait, you want to fly our one-and-only-hope mission to save the planet? Sure, climb aboard." WTF?

The second half, on the other hand, had some fun Aliens-esque action down on Earth with the Skitter chesthuggers. After the body count of Saturday Night Massacre, there was real tension that Hal, Weaver (NOOOO!), Matt or Dingaan could've been toast.

Weaver's tribute to Anne when he thought he'd be skitterized was touching, especially considering how their friendship has grown since the days of them bickering over fighter versus civilian rights. I love Weaver. The surrogate father bond building between him and Matt is sweet. It was nice to see Anne save them, though I could've done without the Magic Flamethrower of Plot Convenience. "There's a lot you don't know about me, Dan." Heh.

The ending was perplexing. Lexi obviously had to die because she was too powerful; no surprise there. But geez, Tom sure didn't try very hard to save her, did he? When the Volm showed up, why wasn't he all: "Don't worry about me, save Lexi!" or "Lexi, wait, the Volm are here - they can blow up the base!" I can't help but wonder if it's another example of lazy writing, or if they honestly intended for it to look like he wanted her to die.

So all in all, an uneven episode to cap off an uneven season. It's still one of my favorite shows on TV, but part of me is glad next season is the last. Here's hoping they manage to wrap things up and go out on a high note.

Outlander - Sing Me a Song