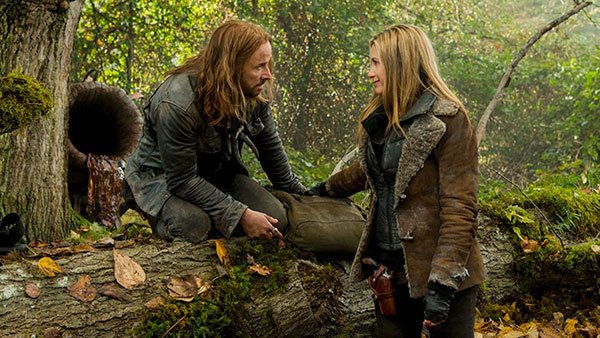 Falling Skies returns to form with another character-driven episode.

Falling Skies is back! And I don't mean the new season, which actually premiered two weeks ago. I mean that it finally seems to be shaking off the funk it's been in for the last two seasons, getting back to its roots as a heartfelt, human drama.

Things are moving quickly as Falling Skies counts down its final episodes - a little too quickly, actually. Hatchlings pays off several ongoing storylines in dramatic fashion, but several of the plotlines felt rushed and underdeveloped, notably the ease with which they captured the Overlord and wiped out the Skitters.

But that's forgivable, because the episode was packed with the kind of human drama that's always been the best part of the series.

Although I never liked Sara and her death was telegraphed from miles away, that was still an awful way to go. It brought some welcome depth to Pope, though, and sets up a showdown between him and Tom that's been a long time coming. Still, I can't help but agree with Michael Ahr of Den of Geek that it was a relief to see "the end of the most awkward relationship on television".

I love that Anthony's getting more screen time - finally! - but I find it hard to believe that nobody in the 2nd Mass has noticed how crazy he's been acting before now. Especially Anne. She admits she should have picked up on it sooner, but it's still strange that she didn't.

Speaking of Anne - the stepmom relationship between her and Matt has always gotten short shrift, but it's still nice to see little nods to it, like when she pats him on the back for helping to build the drone. You know what else would be nice, though? If anyone in the Mason family showed the slightest hint of grief over losing their daughter/sister just a week ago. I know they've got a lot going on, but come on. Someone? Anyone? The closest we get is a mildly sad look from Anne when Matt is talking to his new friend about losing her mom.

In other news, it's a relief that they're giving Maggie a subplot that doesn't center around the Mason brothers. She's too strong of a character to be defined solely by her romantic entanglements, and it was great to see her taking charge.

Tom continues to be a hard-core, callous shell of his former self, barely batting an eye before torturing the Overlord (and Ben and Maggie in the process) or writing Sara off as a lower priority.

What I find most disconcerting is how readily the other characters seem to accept this. There are a few concerned glances here and there, but I'd think they'd be a little more worried about his uncharacteristic behavior - especially given his supposed encounter with the Dorniya. I did like the exchange at the end, though:

Tom: “Do you think we should have gone to get her first?”

Weaver: “No. I just remember a time when you would’ve.”

Last but not least, the episode was peppered with callbacks to plotlines from earlier seasons - like Pope's kids and the fact that the Skitters evolved from another harnessed race. Here's hoping that this is a sign that the show-runners will hold to their promise and tie the loose ends together before the end.

Falling Skies - Ladies of the Apocalypse

The Dinosaur Whisperer and the Ice Queen