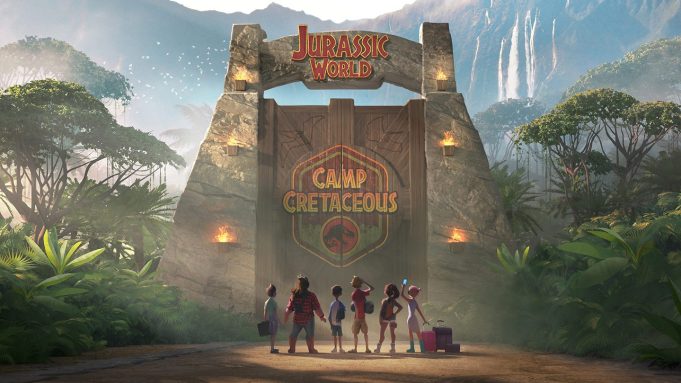 Another batch of kids are in peril in this Jurassic World animated adventure.

On the surface, "Jurassic World for Kids" feels like a hard sell. The main attraction of the franchise is people getting chased (and often eaten) by dinosaurs in a series of jump-scares and close calls. Not exactly kid-friendly. Despite this obvious hurdle, the new Netflix series Camp Cretaceous manages to make Jurassic World accessible for the tween audience.

The show revolves around a group of kids who won an early access preview to the new summer camp at Jurassic World: Camp Cretaceous. (The name is an amusing nod to half the dinos in Jurassic World actually being from the Cretaceous period, not the Jurassic.)

With only six campers admitted to the preview program, the show has a narrow focus that hearkens back to the small group dynamics of the original Jurassic Park.  The main character is Darius (voiced by Paul-Mikél Williams) a dinosaur enthusiast who won his spot in camp by beating a Jurassic World video game. The other characters in the impressively diverse cast start off pretty one-dimensional (the rich jerk, the social media fanatic, the germaphobic geek, the bubbly farmgirl, the anti-social athlete) but they each evolve and gain interesting depth as the series progresses. Everyone gets a moment to shine.  Notably, there are some interesting friendship and rivalry dynamics between the three girl characters, and not a romantic storyline in sight.

Running in parallel with the Jurassic World storyline, the show's peril can be intense. Kids run for their lives, barely escaping snapping dino jaws. There are several death-defying falls.  At one point a main char is believed dead. (Adults will recognize the 'didn't see a body' trope; younger kids maybe not so much.) Extras are eaten by dinos (though the camera always cuts away.) Darius' dad dies off-screen in flashbacks, but it's still sad. All in all, there's a reason for the PG rating. It may be too much for young viewers.

The show serves as a nice bookend for Jurassic World. Familiar chars resurface or are mentioned. For those who haven't seen the original movie, the series stands on its own just fine. But for those who have, there's a sense of foreboding, knowing what's coming next. Key events in the series are woven seamlessly into the movie's timeline. The animation is so-so, but the dinos themselves look awesome. Familiar favorites like the Indoraptor and Blue are joined by new ones: Bumpy, the cute baby Ankylosaurus, and Toro, a Carnotaurus that keeps popping up to menace the kids.  The show is a fine addition to the Jurassic expanded universe.

Camp Cretaceous season 1 is currently streaming on Netflix. Season 2 has been green-lit.