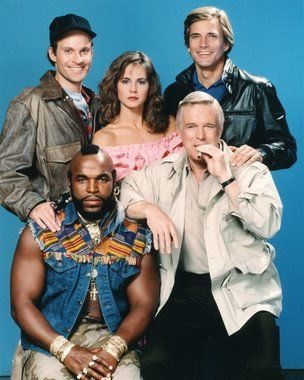 Can a show often under fire for sexism have its own self-rescuing princess?

When our favorite Netflix shows started getting stale after endless 'reruns' (re-streams?), I found myself in search of something new to watch with the kids. Somehow I discovered that Amazon Prime now has a host of old 80's TV shows, and decided to dust off the A-Team. The old action standard dovetailed nicely with my own nostalgia and my son's current obsession with military gadgets.

Watching a 30-year-old TV show is not without its challenges. We have to pause now and again to discuss things that are just not acceptable by modern standards: Hannibal dressing up in blackface, Face kissing women without their consent,  the problematic depiction of Murdock's mental health issues, just to name a few. But on the whole, it's still good for some mindless, ridiculous, popcorn entertainment.

If that was the goal, it's ironic that they nevertheless managed to create one of my favorite 80's TV characters: reporter Amy Allen.

Girls in action movies/shows back then rarely got to be anything other than the love interest or the damsel in distress, but Amy was neither.  Clever and determined, she relied on her wits, not her wiles.  Her first scene involved her standing up to her boss, and in the first episode she traveled with the A-Team to Mexico to rescue a co-worker.  Mostly she played a supporting role on the team, helping Face with his scams or using her connections with the newspaper to gather valuable intelligence.  But occasionally she got to step into the action--parachuting into the jungle or fighting back against the bad guys.  More than once, her actions got the rest of the team out of a jam.  On a show where most of the female characters were either clients to be rescued or marks for Face to scam, she was a breath of fresh air.

Viewed through the lens of a generation who grew up with Rey and Captain Marvel, though, Amy just doesn't hold up as well.  "Hey, they finally let Amy do something," the kids commented after one episode, unimpressed up to that point.

Amy was written out abruptly in the middle of the second season, reportedly because of behind-the-scenes tensions over the size and nature of her role (can't really blame her for that one). Her replacement, Tania, was a whiney, useless character whose own actress even described her as "a bimbo."  The show just wasn't as interesting after that.

But I still think Amy was pretty cool, standing up for others and risking jail to help the A-Team and their clients.  Not all heroes need light-sabers or super-powers.