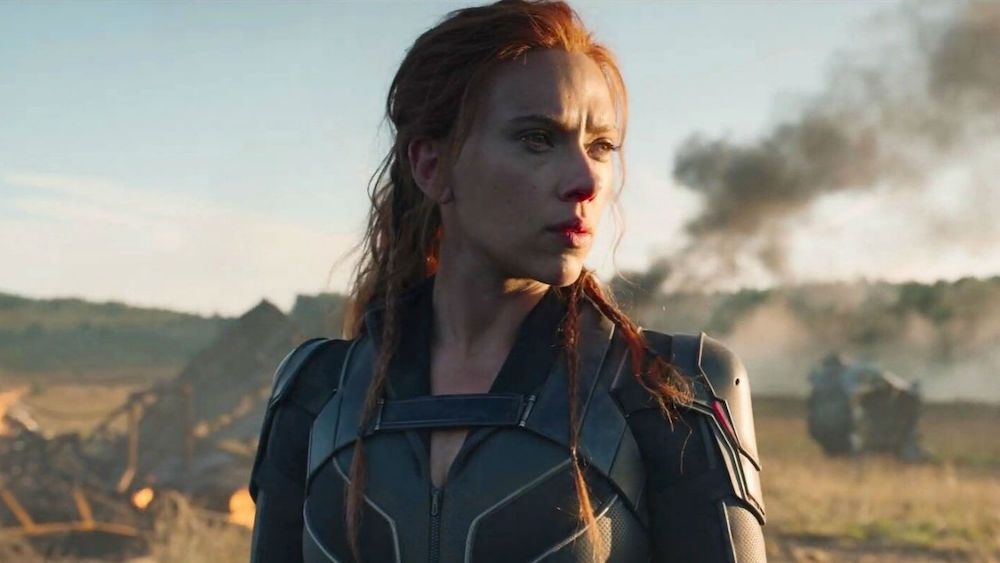 Black Widow's solo outing is too little, too late for the Avengers' leading lady.

Much as I like the character of Natasha Romanoff, it has always been a little hard to buy into her presence among the Avengers. Cap has his super-soldier serum; Iron Man has his suit; Thor has his Asgardian powers; and Hulk is, well, Hulk. Black Widow... has some cool spinning kicks?  It's a power differential that strains credulity.

As a solo film, Black Widow was a chance to level the playing field.  Instead, we get this:

As CinemaSins so aptly put it:  "SHE IS PEOPLE". Having her survive stuff like that--time after time--with barely a scratch is just silly.

If the film were strictly shooting for a comic book vibe, shenanigans like that could be forgiven. But tonally the movie seems to waffle unpredictably between Bourne Identity levels of gritty (with quotes like "I doubt the god from space has to take ibuprofen after a fight" and details about Natasha's dark past), to over-the-top James Bond spy stuff (flying fortresses, mind control), to the typical Marvel staples (protagonist fighting their power-twin, aerial acrobatics with explosions all around).  It can't make up its mind what kind of story it wants to be.

Black Widow redeems itself with its character moments. The movie opens by showing a young Natasha with her "family" of Soviet spies living undercover in Ohio. The relationship between Natasha and her sister Yelena is the heart of the film, and it's refreshing to see sisterhood front and center in a movie like this.

The banter between the sisters is the best part of the movie, with Yelena getting some stand-out quotes.  Making fun of Natasha's superhero posing, critiquing her for being "the killer that little girls call their hero", and a fistful of great quips.

When they round up Melina and Alexi, the closest thing to a mother or father either of them had, the dinner table tension is deliciously awkward. "The best part of my life was fake and none of you told me," Yelena accuses. This twist on the girls' backstory brings some genuine human drama to an otherwise improbable plot.

If only the rest of the movie had been that grounded, it could have been great. It's not bad, but Natasha deserved a better send-off.  Bring some popcorn and lock your suspension of disbelief in the trunk.

For All Mankind - Season 2 Review