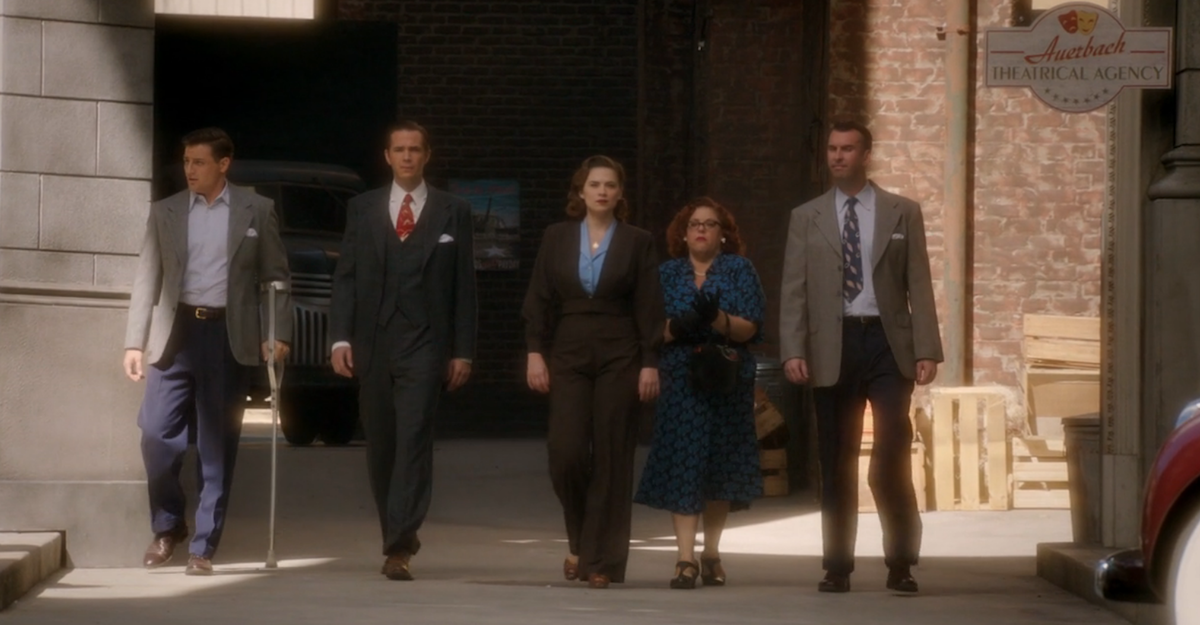 Peggy gets a little help from her friends for a daring heist.

It is now officially embarrassing how far behind I am with these recaps, but I'll catch up eventually.

Peggy was an island for much of season 1, barring the occasional helping hand from Jarvis. For a moment I was worried that season 2 was heading down that same path, with Peggy working against the grain to clear Wilkes' name. Refreshingly, that hasn't been the case. This episode highlights just how much things have changed, giving other characters a well-deserved chance to shine.

There's a moment in the film Armageddon where the general looks at the team of misfits NASA's assembled and snarks incredulously, "So this is who you found to save the world..." That was the first thing that sprang to mind upon seeing Peggy's team sauntering down the street in their slow-mo money shot.

With a butler, a secretary, a fumbling scientist, and a partially-disabled agent, this was hardly the dream team. But what's beautiful about this episode is how it shows each of them rising above the obvious challenges to get the job done. Each of them brings unique and essential skills to the table. 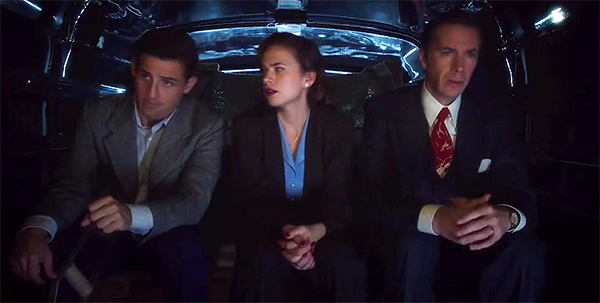 Jarvis finally gets to save the day. The look on his face when he realized he was stuck inside with the uranium rods? Priceless. "For the record, that was nothing like making a soufflé."

I adore the way the show has set up Whitney Frost. Cool and manipulative, she's far from a mustache-twirling villain. It's evident in the little things, like the way she keeps her sad-sack husband around (you almost feel bad for the guy -- almost) and how she convinces Manfredi to help them steal the uranium rods. 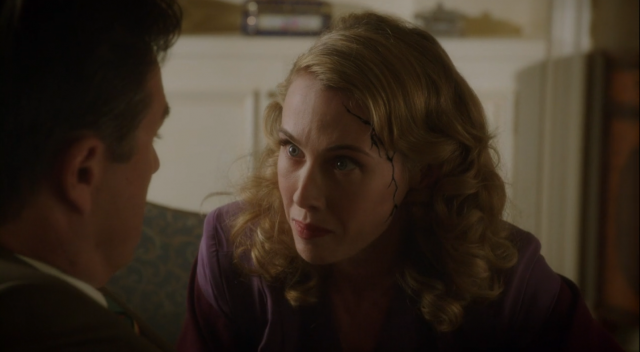 Words you never want to hear from your super-villain: "I need an atomic bomb." And she says it like she just realized she forgot her dry-cleaning.

It was great to finally see Whitney and Peggy square off directly, albeit briefly. Whitney's reaction to Peggy's offer of help was understandable. "Fix me? Why would I want to be fixed?" As far as she's concerned, zero matter is the best thing that ever happened to her.

The odd shifts in tone were a big weak point this episode. Agent Carter has always tried to balance witty humor with serious drama, but this time around the balance seemed off. Some of the banter - particularly with Rose and Samberly - was trying way too hard to be funny and coming up short.

I must admit I was laughing out loud at the scene in the Roxxon office where Peggy kept zapping the bossman to erase his memory. 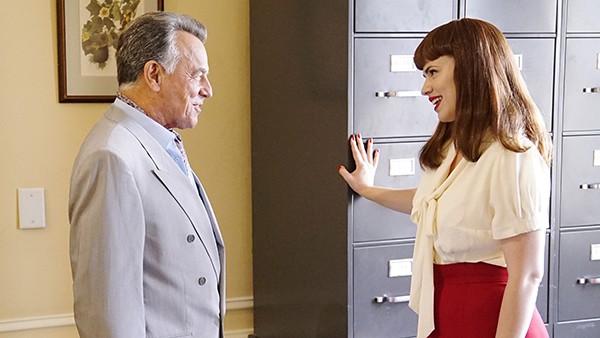 But that sort of borderline-slapstick scene felt jarringly out of place in the same episode where Manfredi beats a guy to a pulp and Peggy gets impaled on rebar. Speaking of which... both of those scenes were particularly vicious by Carter standards. This is a show where Peggy routinely gets into these giant brawls while barely knocking a hair out of place.

So all in all the episode was pretty enjoyable, until you stop, sit back, and think: "Wait a second. None of that made any sense whatsoever." The episode had plot holes big enough to drive a truck full of zero matter through.

A key to a top-secret facility he wears on his belt buckle? Seriously?

Wilkes' zero matter fairies are awfully helpful, giving him a specific address to go to.

Peggy fell feet-first off the upper level. How did she land horizontally on the rebar? Did she try to do a backflip in mid-air or something?

The whole thing where they can't go to a hospital because... reasons? ... and have to rely on Sousa's nurse girlfriend to take care of a serious abdominal injury? Stupid. To say nothing of the fact that a piece of rebar piercing the middle of your abdomen and missing all of your organs is pretty much impossible.

I'm pretty sure uranium rods don't explode when you jostle them. This isn't nitroglycerine. Can you imagine a nuclear bomber hitting a patch of turbulence? Silly.

For an "impenetrable" top-secret facility, their defenses were awfully... penetrable.

Couldn't you boys carry Peggy out to the car? Girl just got impaled by rebar for goodness sake!

Ah well, they can't all be winners.