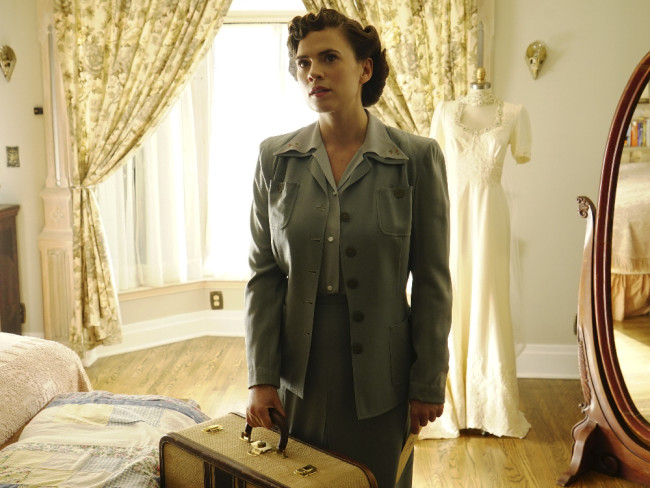 Backstories and exposition with a side of hijinks.

I fell a little behind in my Agent Carter reviews, so you get a double feature this week, complete with Marvel's cute valentines. 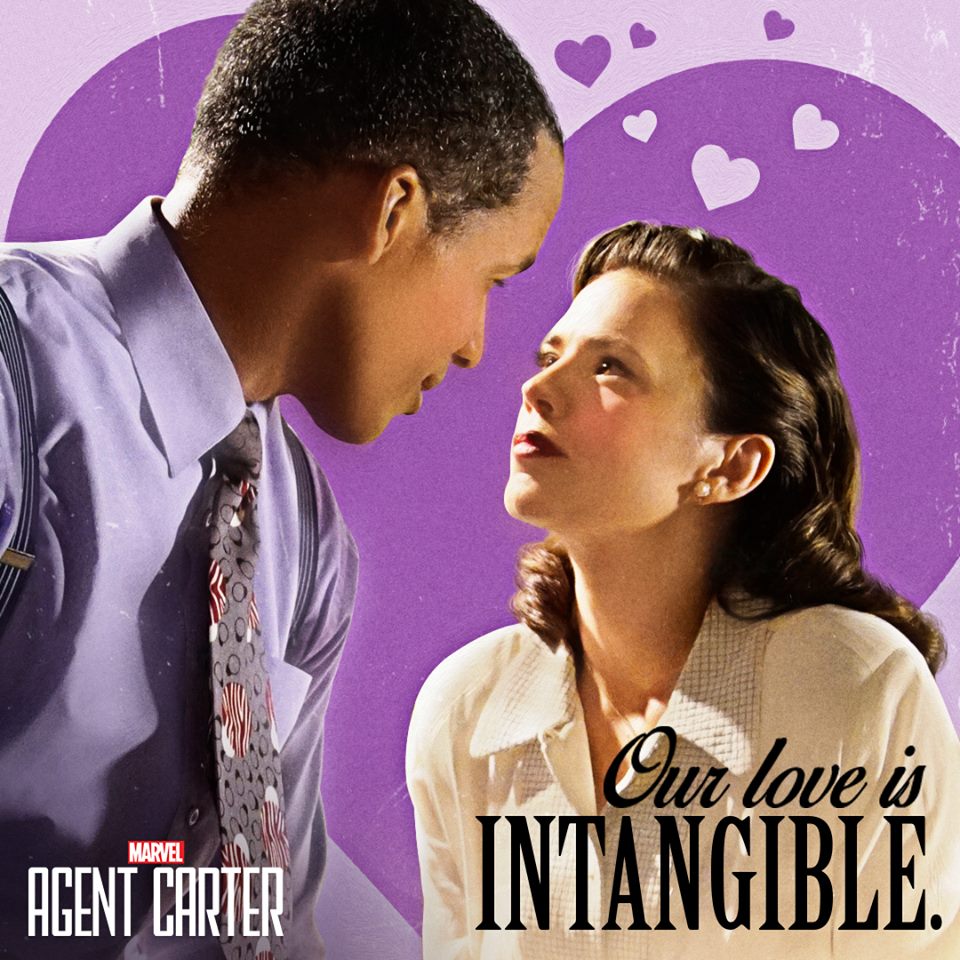 So Wilkes isn't dead after all. No surprise there, but I was surprised (and a little dismayed) at how much this all feels like a retread of season 1. Peggy mourning a guy who isn't actually dead, working outside the system to clear the name of a friend who's been unjustly framed... it was a serious case of deja-vu.

The specter of the Communist scare worked well here, though, and it was nice to see Peggy's reaction to finding out that Wilkes is still alive. I still feel like their relationship is a bit rushed, but at least they've got some chemistry to make up for it.

Wilkes' storyline also proved a great excuse for seeing Howard Stark at his finest. He's so fun when he's an obnoxious/endearing playboy, it's easy to forget that he's also a bonafide genius. Directing his movie, commanding the Arena Club, trying to remember who Dottie was... he easily steals every scene he's in.

Howard: "Always thought you should be in pictures, Peg... Want to play a sassy beer wench?"

Peggy: "I'd rather be the cowboy."

Howard: "I like it. Don't think the audience is ready yet."

Peggy: "But they're ready for a movie based on a comic book? Sounds like a dreadful idea.”

The Peggy and Jarvis Show 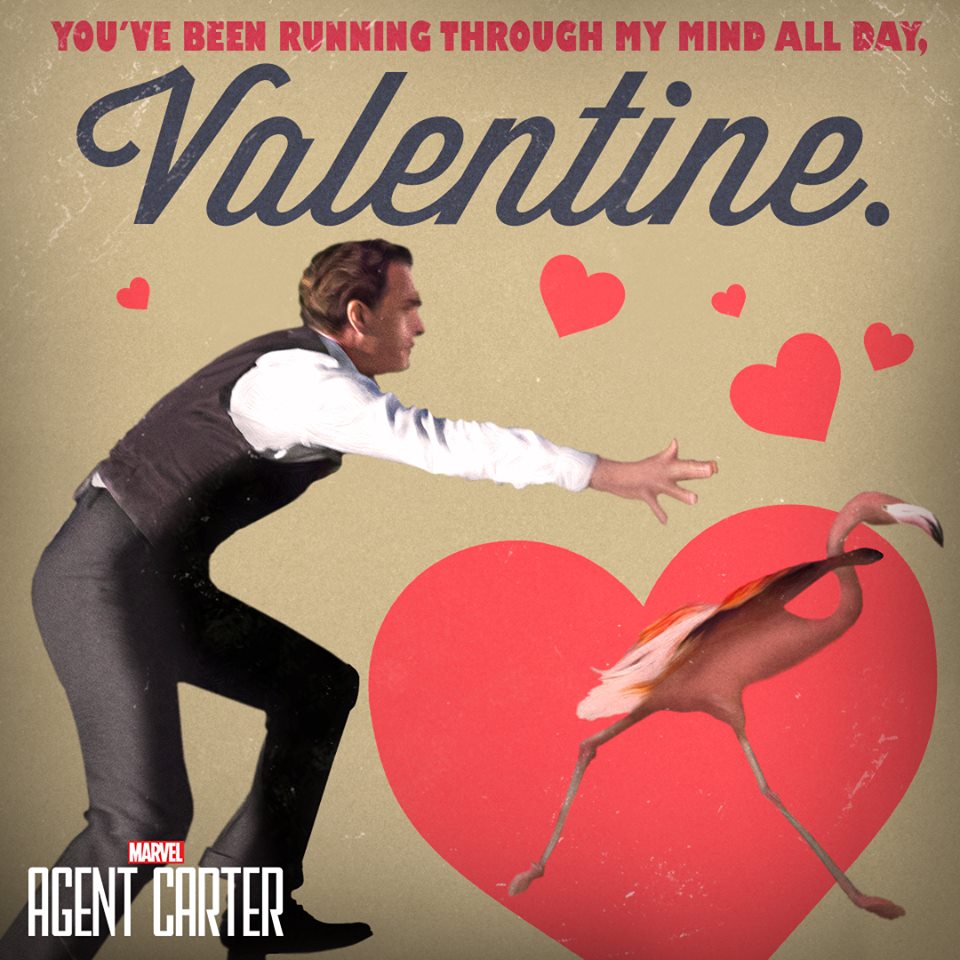 I just adore seeing Peggy and Jarvis as partners. Their hijinks, their banter. It was just the right amount of humor to be hilarious without being slapstick.

Peggy, agahst: "Not the flamingo."

Jarvis: "The koala. Its adorable appearance belies a vile temperament."

My favorite moment was Jarvis jumping to Peggy's aid after she was attacked by the assassin. He's definitely graduated from occasional bumbling sidekick to genuinely-useful teammate. (Though he still bumbles... witness the tranquilizer dart mishap.)

On the SSR front, that creepy FBI(?) guy, Masters, has called Thompson out to Hollywood, much to everyone's dismay. They seem to be setting Thompson up either to become a full-fledged villain or have a crisis of conscience. In the mean time, he's just an ass. This, however, does give Peggy an opportunity for the best burn ever:

“You’re being a coward. You are so afraid of ruffling powerful feathers that you’re doing what you always do: Burying an ugly truth and hoping that someone will pin a medal on you.” -- Peggy

Sousa has Peggy's back, even after learning that she had been going around behind his. Her reaction when Sousa realized she had the assassin in her car was priceless.

“We caught a possum on this property earlier this morning. Vicious little creature. ... Or I have a man stashed in the boot.” -- Peggy, trying (unsuccessfully) to divert Sousa's attention from her prisoner

Seriously, it's no wonder marvel.com posts the top 10 quotes from every episode. There are so many!

Peggy and Sousa managed some clever blackmail with a perfectly period threat of malaria, and found out... stuff? I don't know, something about rich white guys trying to take over the world or something. Zzzzz. All this Arena Club stuff feels like a side show to the main villain - Whitney Frost.

Fork in the Road

The dueling backstories of Peggy and Whitney Frost served as both a poignant reminder of the battles they faced to get where they are, as well as a nice contrast to show that they're not so different. (Apart from Whitney being, you know, completely evil.)

While I appreciated seeing the bond Peggy shared with her brother, I didn't much care for the idea that she only joined the SOE because of his death. It seemed kind of... un-empowering for one of TV's most confident and self-reliant heroines.

Setting that aside, though, I did appreciate them referencing the SOE. If you ever want to read about some real self-rescuing princesses, check out The Women Who Lived for Danger: The Agents of the Special Operations Executive. I think Peggy would have fit right in.