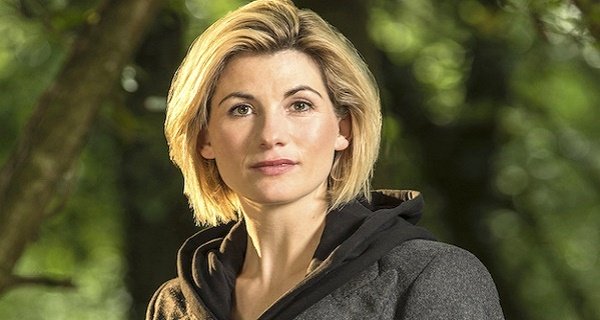 For the first time in fifty years, a woman takes center stage on Doctor Who.

At a time when sci-fi TV shows with decent female characters were few and far between, Doctor Who was my sanctuary. Sarah Jane. Nyssa. Leela. Romana. Ace. These were the characters I followed through my pre-teen and teen years, watching re-runs on PBS and devouring the novelizations. Yeah, they got rescued a lot and always played second fiddle to the Doctor, but they were nevertheless smart, brave and independent.

I drifted away from Doctor Who eventually, but I still have a soft spot for the show. It tickled me to hear yesterday that they'd cast Broadchurch's Jodie Whittaker as the Thirteenth Doctor.

The outcry was immediate - rabid fans taking to social media to vent their outrage. Skeptical disapproval of an incoming Doctor is nothing new. This guy's too young, that guy's too serious ... it comes with the territory. But the vitriol leveled at Whittaker over her gender is disheartening.

To an extent, I can sympathize with those who aren't thrilled with the switch. I was a little disappointed that they made Starbuck a woman in the reimagined Battlestar instead of reinventing Athena or Sheba. Rather than seeing a woman cast as James Bond or Han Solo, I'd prefer a brand new franchise centered around a female super-spy or space pirate. But at the end of the day, I respect the creative choices of the show-runners. If they want to explore a female Starbuck, or have a woman pick up Captain America's shield, that's their prerogative.

And let's be real. The Doctor is a centuries-old time-traveling alien with two hearts who regenerates into a new form instead of dying. It's been well-established in canon that Time Lords can switch genders when regenerating (see The Corsair and The Master). If ever there was a character tailor-made for a gender swap, it's The Doctor. Having one female Doctor in fifty-four freaking years is not going to rip apart the time-space continuum.

Amid the furor, there have been some bright spots. In an interview with BBC, Whittaker said about taking on the role, "It feels completely overwhelming; as a feminist, as a woman, as an actor, as a human, as someone who wants to continually push themselves and challenge themselves, and not be boxed in by what you’re told you can and can’t be. It feels incredible."

Colin Baker, who played the Sixth Doctor, tweeted his support, saying, "...the BBC really did do the right thing and let the Doctor be in touch with her feminine side. As a father of daughters - result! ... Change my dears and not a moment too soon - she IS the Doctor whether you like it or not!"

But I have to say my favorite reaction comes from my friend's son, a young Who fan. After watching the reveal, he was puzzled. "I didn't see him." His mom told him to watch again and then he got it. "OH! Is the Doctor a girl? I thought that was his companion. That's cool." He gave his mom a thumb's up.

Maybe there's hope for the future after all. And maybe I just might have to tune in again for the first time in quite awhile.