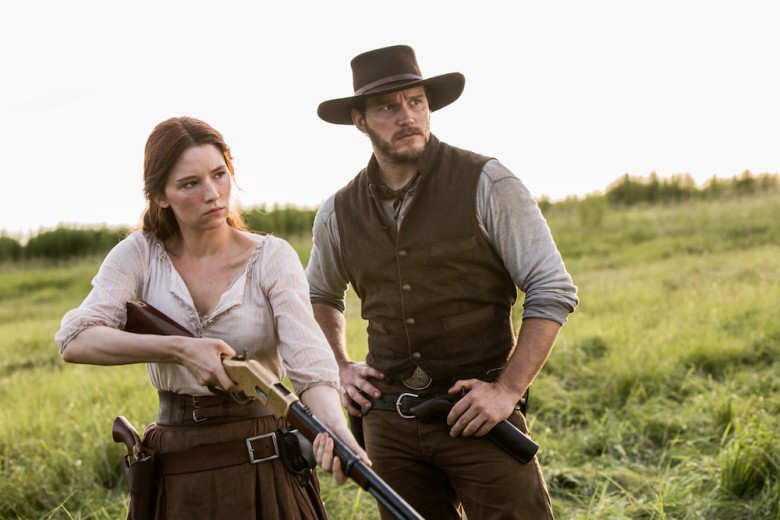 The remake is nothing to write home about, but you can't go too wrong with Denzel Washington and Chris Pratt playing cowboy.

I’ve always been a sucker for Westerns. Gunslingers and outlaws; the wild frontier. Women tend to be well-represented on the historical-drama/romance side of the Western genre; less so on the action/adventure side. Excellent female-driven outings like The Missing tend to be overshadowed by silly ones like Quick and the Dead.

Needless to say, my expectations weren't terribly high. But Chris Pratt and Denzel Washington in a Western? I don’t even care what the plot is - give me a ticket.

Looking for a Hero

The plot, as it turns out, is pretty decent. A robber baron has set his sights on the gold in a small frontier town, and is determined to drive the good townsfolk out by any means necessary. It’s established early on that said means include burning down the church, terrorizing innocent children, and shooting men in cold blood in the middle of the street. So, really, it’s kind of perplexing that he doesn’t just kill them all and burn the whole town down then and there. Could’ve saved himself a lot of time, effort and henchmen. 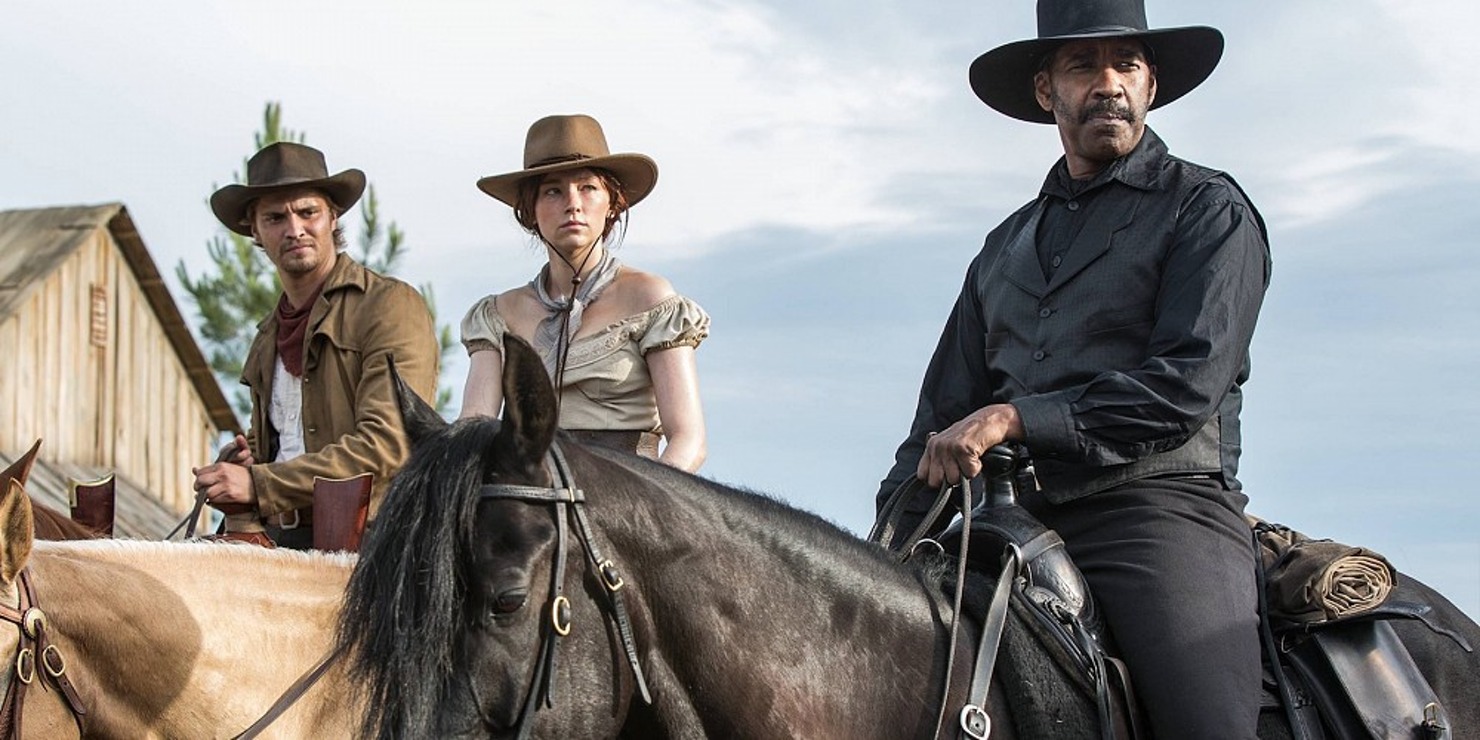 But no, the Baron decides to give them three weeks to decide whether they’re going to sell out or die, and that’s time enough for the recently-widowed Emma Cullen (Haley Bennett) to find her town a savior: deputized bounty hunter Sam Chisum (Denzel Washington). Chisum soon goes on the world’s weirdest recruiting spree, picking up six other outlaws and outcasts to round out his “Magnificent Seven”. That all seven of these guys so quickly and willingly sign on for a suicide mission is something the movie wisely just glosses over.

After running out the goons that the Baron left behind, the Seven prepare to defend the town against the inevitable reprisal. This was actually my favorite part of the film, as the outlaws try to turn the townsfolk into a rag-tag militia and set up clever traps to overcome their far-superior foe. It all came together nicely in the climactic showdown at the end.

As you might expect with nine main characters (the Seven, Emma and the Baron), character development is pretty thin across the board. But there were a couple of standouts, particularly Ethan Hawke’s traumatized Civil War sniper Goodnight Robicheaux (best name ever) and Pratt’s charming gambler Faraday. Chisum is a pretty typical strong, silent type, but Washington commands the role easily.

The movie gets mad props for having an ethnically-diverse cast, representing the melting pot of the West. Which is what makes its complete lack of gender diversity all the more striking. 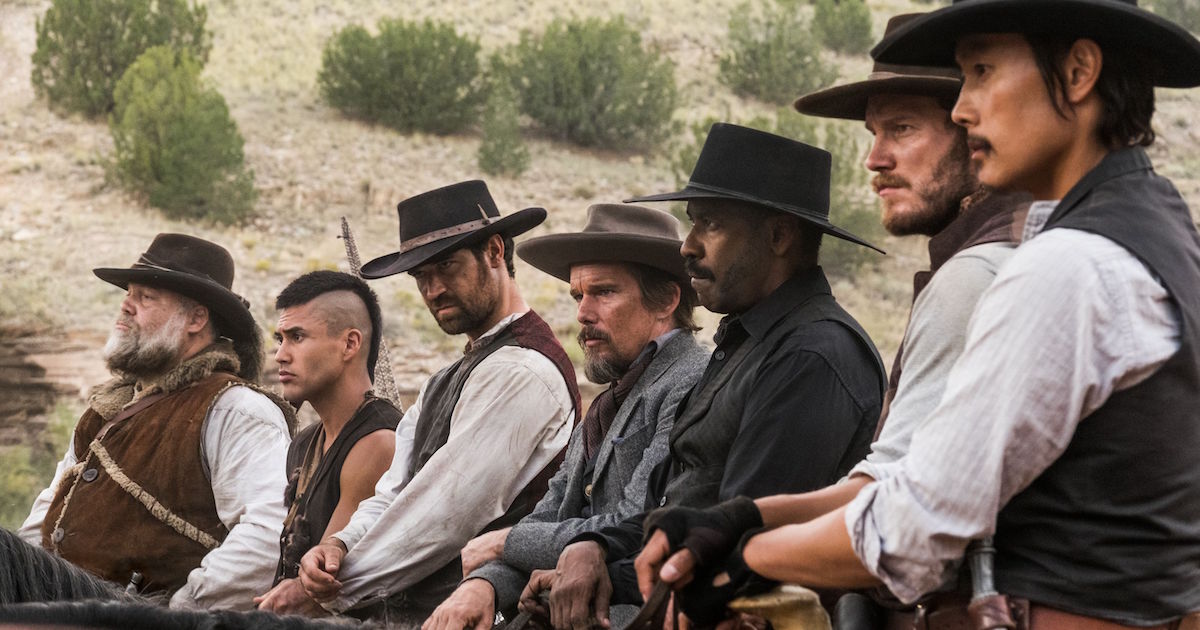 Emma wasn’t a bad character, but since she’s the only one in the movie it’s like they had to sling her around into all possible female roles at once. Grieving widow, check. Gratuitous cleavage, check. Potential love interest, check. Surrogate little sister, check. Badass strong female character, check. Terrified damsel in distress, check. Whoa whoa wait — aren’t half of these contradictions with each other?

She’s the one who - along with her friend Teddy - first approaches Chisum about helping the town. But while she talks a good game with lines like, “I seek righteousness, but I’ll take revenge,” in the end it’s not her powers of persuasion that motivate him, but an old score he has to settle with the Baron. It’s the sort of detail that adds very little depth to Chisum’s story while cheapening Emma’s role as a catalyst.

Later in the story, Emma proves herself capable with a gun and declares her intention to take Robicheaux’s place when it looks like he’s going to bail. For a moment there I thought that the movie was doing a clever twist - allowing Emma to be one of the Seven after all. But nope, it was a short-lived fancy.

One Step Forward, Two Steps Back

It didn’t need to be though. All of the Seven are larger-than-life heroes. It’s not like the inclusion of a female gunfighter in this scenario would’ve been any less outlandish than a knife-throwing Chinese guy or a Cherokee renegade or an African-American lawman. As Casey Cipriani wrote for Bustle:

Sure, some people might argue: "It's a band of outlaws and bounty hunters. It wouldn't be realistic to include a woman." But examine history a bit closer and you'll find that that's not true at all…Women were teachers, laundresses, and dance hall girls, but they were also ranchers, farmers, and yes, outlaws.

Emma does at least get her moment in the sun, joining the firing line with the boys in the climactic battle. But then almost immediately thereafter the movie inexplicably chucks her into a ‘damsel in distress’ role when confronted by the Baron’s token Commanche. The woman who was moments ago was facing down a small army under a hail of gunfire just freezes and sits there cowering helplessly until the good-guy Commanche can come and have his moment to be the hero.

What I find most interesting is how the director, Antoine Fuqua, seemed blind to the bizarre inconsistency in the role, telling IndieWire:

“It’s a balancing act…She’s not running around having to put on pants or smoking cigars and trying to be a guy. She was still a woman, and she was kicking ass when the time came to it.”

It was an admirable vision, and at least they tried, but in the end Magnificent Seven came up short.

Six Shows to Get Girls Excited About STEM